GOSSIPONTHIS.COM Sports Gabby Douglas’ Hair Is Dividing the Internet Again at the 2016 Olympics... 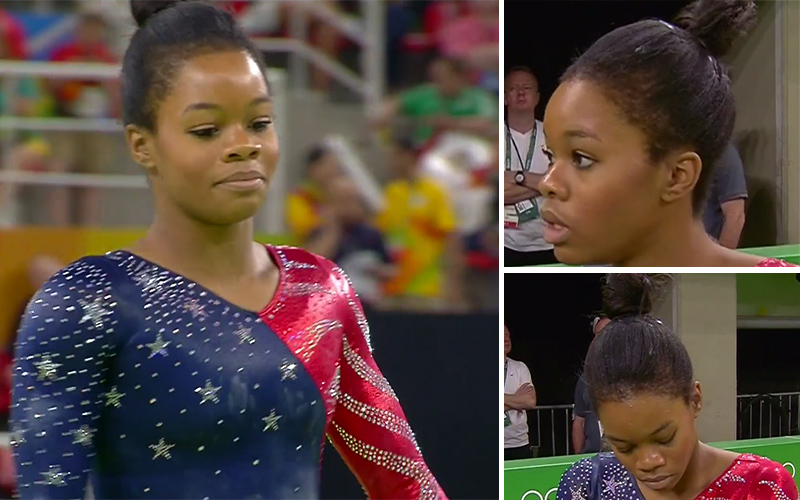 In 2012, when Gabby Douglas was a mere 16 years old, the cute, brown-skinned girl stunned the country and the world with her gold-medal winning performances.

But she also stunned black America in particular for not having her hair “laid,” as the kids like to say. After much chatter was had on Twitter in particular about the state of Gabby’s hair, which resulted in MANY think pieces, you might be inclined to think Gabby would return to the Olympic stage in Rio with a flawless hair game.

You, unfortunately would be wrong. As Gabby Douglas and her teammates from Team USA hit the mat on Sunday in Rio de Janeiro, discussion, once again, turned to the state of Gabby’s hair. There were two camps: Those who were baffled that Gabby once again went on international television with her “kitchen” looking like that and those who chastised and shamed people for even commenting on the state of her hair in the first place.

Here’s a sampling of tweets from the “Why the Hell Did Gabby Douglas Leave the House with Her Hair Looking Like That?” Camp:

No shade, but… Gabby Douglas' hair… C'mon, it's 4 years later, you would think she would fix that. Especially for the Olympics.

And here’s the rebuttal from those in the “Don’t Ya’ll Have Something Better to Worry About?” Camp:

why y'all talking about Gabby Douglas' hair, this girl is at the olympics competing, what y'all doing???

Shut the hell up about Gabby Douglas's hair. She isn't there for her hair

Y'all stay talking bout gabby Douglas hair but she can buy y'all back to school weave ?? #Olympics #gymnastics #GabbyDouglas

So, yeah. People have some feelings about this situation.

Here’s the deal: I’m torn. Do I think Gabby’s edges and roots clash uncomfortably with her relaxed head of hair? Sure. But do I also recognize that she’s a professional athlete who is competing and working up a sweat, which therefore means her edges are never going to lay completely flat anyway? Yes.

I don’t know how strict the rules are about hair in gymnastics and who determines those rules, but I think a great solution would be for Gabby to rock cornrows in an updo fashion. She can push herself and not worry about her hair getting sweated out but also look completely polished and snatched, without the awkward two-texture look or the annoying flyaways as her hair breaks away from the 50 clips she has attached to her head. See? This could be you, Gabby, but someone (Team USA? The IOC?) is trippin’.