GOSSIPONTHIS.COM Sports Pat Summitt Dies: 5 Quick Facts You Should Know About the Legendary... 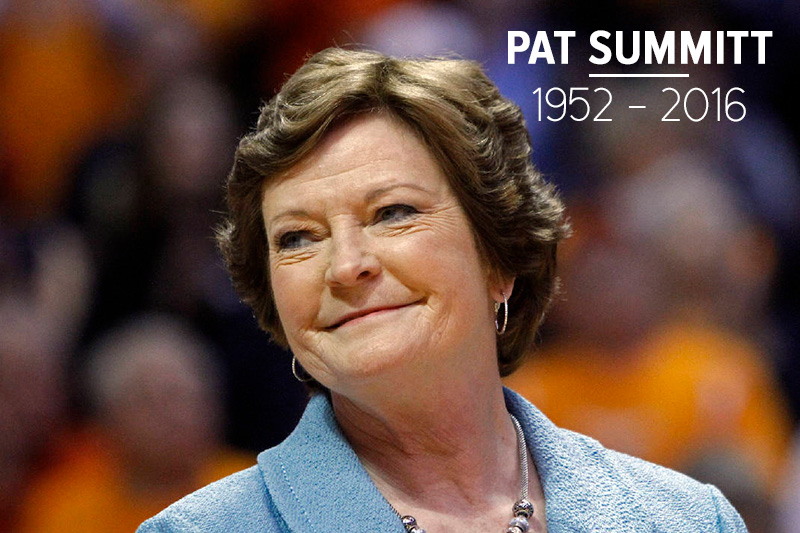 This morning, the sports world — and the country at large –- was rocked with the news that legendary Lady Vols basketball coach Pat Summitt has passed away. Summitt, one of, if not the, greatest women’s basketball coach ever had battled Alzheimer’s since 2011 and finally succumbed Tuesday morning.

In honor of the late great, here are 5 things you may not know about Pat Summitt.

She was the winningest coach in NCAA basketball (male or female)

Over her 38 years as the head coach of the Tennessee Volunteers, Pat Summitt amassed a career record of 1,098 – 208. Those kind of numbers are unheard of and have earned her the title of most winningest coach in NCAA basketball history (both male and female). And her 8 NCAA titles are third most of all time.

She became head coach at 22

In 1974, at the young age of 22, Pat Summitt scored her first job — head coach of the Volunteers basketball team. It was a job that she would hold onto the rest of her life. And over the course of her career, she saw the women’s basketball scene change drastically.

When she first started, the NCAA didn’t even formally recognize women’s basketball, which means Summitt’s job was a labor of love. She even had to drive the team van herself early in her career. But flash-forward nearly four decades and the impact Summitt has had on the game is undeniable.

Over the course of her impressive career, Summitt managed to amass a number of awards and mingle with the highest caliber of celebrities. Some of these include the Arthur Ashe Courage Award at the 2012 ESPN ESPY’s (presented by friend and fellow Volunteer Peyton Manning), the Presidential Medal of Freedom from President Barack Obama (the highest civilian honor a person can receive) and the Naismith Basketball Coach of the Century award in 2000.

A more detailed list of her accomplishments can be found here.

Coach Pat Summitt is carried off the floor by her players after the USA won the Gold in Basketball against Korea on August 7, 1984 in Los Angeles.

She had a mind-blowingly great career

Being the winningest coach off all time in the NCAA is an impressive feat in its own right, but it isn’t the only highlight of her career. During her entire tenure as basketball coach, Summitt never had a losing season. In almost four decades, her team always had a winning record.

Her success wasn’t limited to the collegiate stage, however. Due to her great success in Tennessee, Summit was tapped to coach the women’s basketball team in the 1984 Olympic games where she led the US team to the gold medal.

More than a coach, Summitt was also a writer

Although she was best known for her leadership and success on the court, Summitt also co-authored three books in her life. Her first, Reach for the Summitt, was a biography and motivational book based off of her life. Raise the Roof chronicled the historic 1997-1998 Lady Vols’ undefeated season. And finally, Sum it Up, covered her life experiences, including being diagnosed and living with Alzheimer’s.

History will always remember the greatness that was Pat Summitt as a coach. Her legacy will live on in the record books long after she has gone. But the impact she has had on people in a personal manner is just as, if not more, important. Summitt was beloved by many and will be greatly missed.