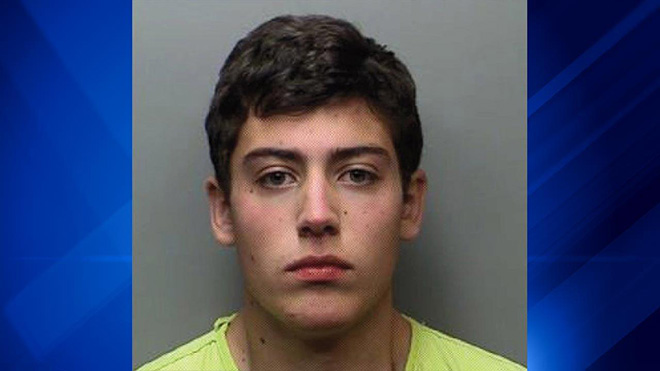 18-year-old Colorado State student Stefan Sortland was expressionless when he posed for this mugshot after he was arrested on charges of aggravated vehicle theft, obstructing EMS, reckless driving, hit-and-run, criminal mischief, attempted motor vehicle theft, unlawful possession of a controlled substance and criminal charges of assault.

So what did Mr. Sortland do to rack up all those charges?

Well, it all started when he went to a Halloween concert where he reportedly took molly and cocaine.

At some point in the night, Sortland noticed an empty ambulance sitting outside the party. That’s apparently when he thought, “Hey, wouldn’t it be a great idea to take this empty ambulance out for a spin?” And he did it.

Police said emergency crews were responding to a call about a drunk student suffering from seizures on campus in Fort Collins, and when they came outside with the patient, that’s when they found out their ambulance was gone.

Thanks to modern technology, police were able to track the ambulance using its on board GPS system, and they found it in the middle of a highway “with several doors open, heavy front-end damage and fluid leaking,” according to the extensive police reports obtained by ABC 7 News.

One officer said it appeared the driver of the ambulance had hit the raised median, jumped the curb, hit a sign, went the wrong way and crossed back over the median before stopping.

Officers said they found 18-year-old Stefan Sortland standing about 30 yards from the stopped ambulance wearing an EMT vest. Officers shot him with a stun gun when he refused their commands. Sortland had a blanket, a cell phone and a box of Wheat Thins with him.

Police said that Sortland admitted he took the ambulance from CSU, then refused to answer questions, but commented, “Why are the lights flashing on the cars?”

After eventually subduing and arresting Sortland, they carried him to the Loveland Police Department, where he “stood on a bench, kicked the wall, and masturbated,” the police report stated.

Police said during his interview with officers, Sortland made a reference that his “friends/roommates were dead, in heaven, and had committed suicide.” Officers said they checked with the two people and found they were both fine.

Police spoke with the 18-year-old’s father, who said his son had no mental issues and wasn’t taken any medications, but he did mention a few odd/irrational texts his son had sent him that night.

Officers said Sortland apologized to them on the way to jail, but a few hours later when he was in the jail’s booking area, the Larimer County Sheriff’s Office said he attacked two deputies who were bringing him lunch. (Ed. note: Sure, go on ahead and bite the hands feeding you, why don’t ya?)

One deputy was punched in the face (which reportedly caused a concussion and some facial swelling), while another “suffered an abrasion and a finger sprain” while trying to restrain Sortland.