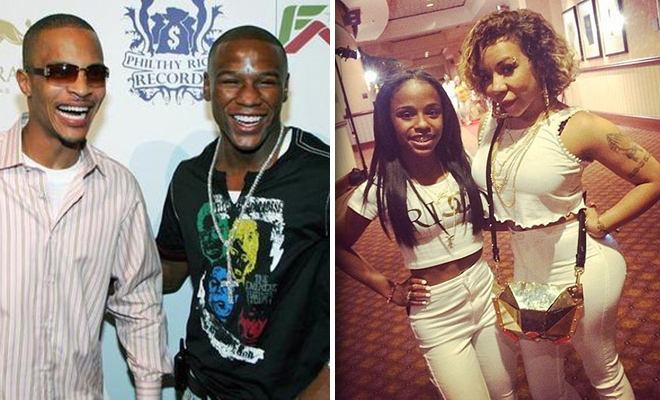 An all-out brawl erupted between T.I. and Floyd Mayweather Jr. inside a Fatburger restaurant on the Las Vegas strip early Sunday morning (May 25), according to TMZ, and apparently, it was all over T.I.’s wife Tiny.

Two videos from the scene (one before the fight and another during) show tensions rising between the undefeated professional boxer and the rapper who has been to jail more times than one can keep up with.

Witnesses say Floyd was eating inside the restaurant when T.I. approached him and started mouthing off. T.I. took a swing at Floyd, and their respective bodyguards immediately jumped in to try and separate them … which is what kicked off the huge fist-throwing, chair-tossing melee.

A Fatburger employee who saw the whole thing was slashed during the brawl, but he refused medical treatment and didn’t want to talk to police.

It wasn’t immediately clear what started the brawl, but sources close to T.I. told TMZ that the rapper was pissed about Mayweather possibly getting too close to his wife Tiny:

Tameka “Tiny” Cottle didn’t appear to be near the fight last night — but she was in Vegas — and hours before posted a picture on Instagram while hanging out with Floyd’s daughter … calling the young girl her “new boo.”

We’re told T.I. was upset about the photo — and others she posted — and felt it was disrespectful to him … so he planned to confront Floyd in person.

Once they got face-to-face though, T.I. flipped out when Floyd said “control your bitch” and started swinging outside Fatburger.