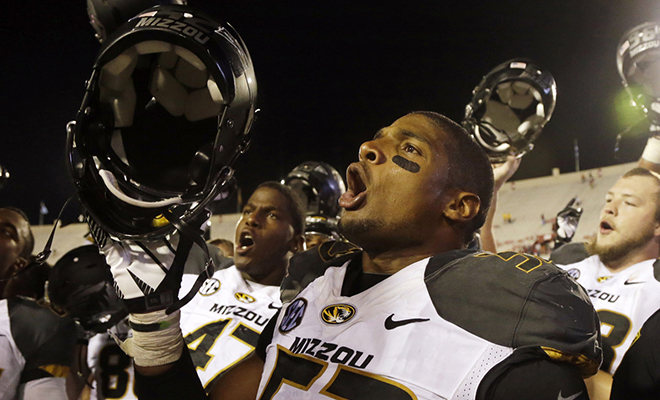 2014 NFL draft prospect Michael Sam — who right now plays college football for the University of Missouri — came out as an “openly gay man” to several major media outlets on Sunday, including the New York Times, ESPN and Sports Illustrated.

Though this may be an announcement for the public, Sam’s family, friends and teammates have known about his sexual orientation for months because he came out to them privately last August, and says he suffered no repercussions … though Sam said that he was, however, surprised when he found out the media had already speculated that he was gay.

“I understand how big this is,” Sam told ESPN. “It’s a big deal. No one has done this before. And it’s kind of a nervous process, but I know what I want to be … I want to be a football player in the NFL.”

Sam also spoke on his coming out this past Sunday in an interview with the New York Times, saying, “I just want to make sure I could tell my story the way I want to tell it. I just want to own my truth.”

Coaches at the University of Missouri divided players into small groups at a preseason football practice last year for a team-building exercise. One by one, players were asked to talk about themselves — where they grew up, why they chose Missouri and what others might not know about them.

As Michael Sam, a defensive lineman, began to speak, he balled up a piece of paper in his hands. “I’m gay,” he said. With that, Mr. Sam set himself on a path to become the first publicly gay player in the National Football League.

“I looked in their eyes, and they just started shaking their heads — like, finally, he came out,” Mr. Sam said Sunday in an interview with The New York Times, the first time he had spoken publicly about his sexual orientation. […]

“Once I became official to my teammates, I knew who I was,” Mr. Sam said. “I knew that I was gay. And I knew that I was Michael Sam, who’s a Mizzou football player who happens to be gay. I was so proud of myself and I just didn’t care who knew. If someone on the street would have asked me, ‘Hey, Mike, I heard you were gay; is that true?’ I would have said yes.”

Sam, at 6-foot-2 and 260 pounds, starred in college football last season. Besides being first team All-American, he was named the top defensive player in the Southeastern Conference, considered the nation’s best league. Teammates named him the team’s most valuable player.

With those credentials, he’s expected to be picked in the NFL draft in May. The Bleacher Report mock draft projected him to go in the late rounds because “athletic limitations including a lack of flexibility and a lack of optimal size are concerning.”

His agent said Monday that he does not think Sam’s decision to acknowledge his sexual orientation will hurt his draft prospects.

“I think, if anything, teams will look at it and see a guy who was honest and upfront instead of waiting until after the draft to potentially make his announcement,” Joe Barkett told CNN. “Mike was forward, and he wants the team who drafts him to accept him for who he is.”

The NFL issued a statement on Twitter on Sunday: “We admire Michael Sam’s honesty and courage. Michael is a football player. Any player with ability and determination can succeed in the NFL. We look forward to welcoming and supporting Michael Sam in 2014.”

Support for Sam on Twitter has been remarkable and many are applauding him for such a courageous act, especially at a time like this with the drafts barely two months away. See some of the positive responses to Sam’s coming out on Twitter below:

Michael Sam isn’t the 1st gay player in the NFL although he is the 1st 2 come out.#realtalk Let’s show him love like a family member. Truth

This took 100x more strength than shredding a double team block and sacking the QB. http://t.co/ByZKmFLAoQ

Michael Sam just Kool-Aid Man’d his way through the last wall of ignorance in sports. My new hero.

I could care less about a man’s sexual preference! i care about winning games and being respectful in the locker room!

Michael Sam! I love you. Bravo!

Good for Michael Sam. Takes courage for where he is in his career and where we are as a league. I applaud him.

Of course you should hate Michael Sam, he’s stronger and faster and bigger and richer and braver than you will ever be

Michael Sam makes me have so much #Mizzou pride. Courage. http://t.co/quPu9fP6Ru

Had multiple convos with @MikeSamFootball this year, amazed at his honesty & courage! Once a tiger, ALWAYS a Tiger!

It appears that @Mikesamfootball is a very high character guy. Beyond athletics, this is what u need in the locker room, & on the field. -SG

Congratulations to Michael Sam. Best of luck… and thanks.

I found it touching to hear that Michael Sam told his teammates last year he was gay and “they all embraced him and no one told the media”.

U.S. President Barack Obama even took time out of his busy schedule to congratulate Sam on his big news:

And of course Sam himself tweeted about his coming out, using his newly launched Twitter account as of Sunday:

I want to thank everybody for their support and encouragement,especially @espn, @nytimes and @nfl. I am proud to tell my story to the world!

Do you think Michael Sam’s coming out BEFORE the NFL draft will affect him actually being drafted into the league? The comment section below is open for debate! Let ‘er rip!