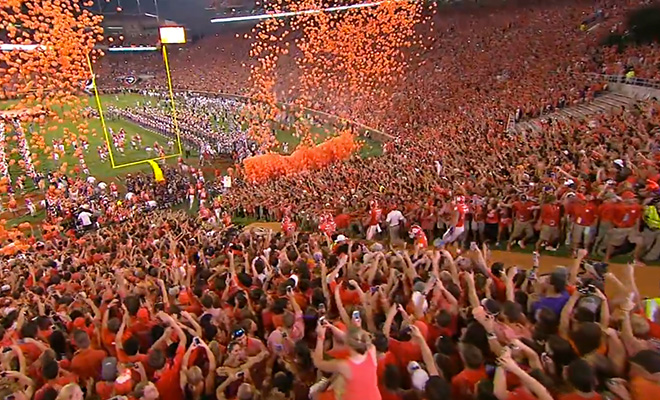 Famed sportscaster Brent Musburger calls it “the most exciting 25 seconds in college football,” and according to ESPN, watching Clemson’s dramatic stadium entrance “will give you chills.”

Well, I say Clemson has the BEST stadium entrance in college football … and I’m not just saying that because I’m a former Clemson student who actually got to see this thing in person a few times. OK, maybe I am, but that’s beside the point.

On Saturday night, ABC aired the game between Clemson (#8) and Georgia (#5), kicking off the 2013 college football season, and before the game, they gave viewers at home an in-depth look at Clemson’s stadium entrance tradition.

After leaving the locker room before the start of a game, Clemson’s football team loads into team buses and travels to the east side of Memorial Stadium by police escort.

From there, they gather around the historic “Howard’s Rock,” then “Run Down The Hill” at the sound of a canon, which funnels them between the crowd and out onto Frank Howard Field in front of 80-plus thousand roaring Clemson fans.

Based on dramatics alone, if that’s not the best stadium entrance in college football, then I don’t know what is!

Oh, by the way. The Clemson Tigers went on to defeat the Georgia Bulldogs, 38-35, which makes their big stadium entrance even more awe-inspiring.