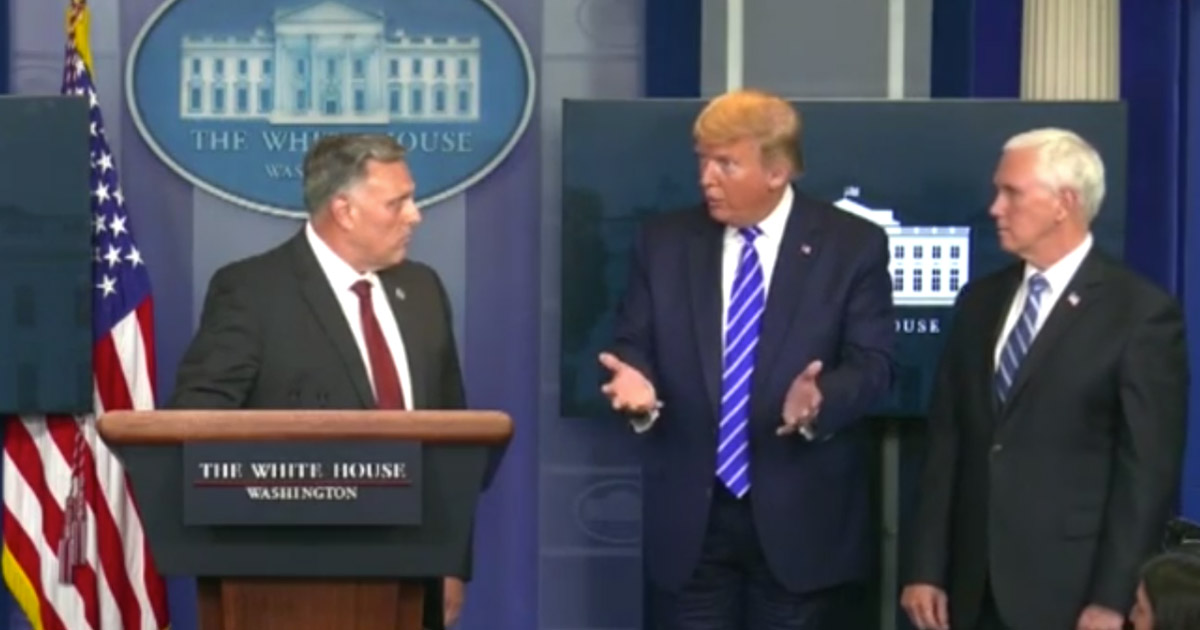 Donald Trump has some very “interesting” ideas about possible treatments for COVID-19 patients.

During a live briefing today on the coronavirus, Trump, who often brags about his gut instincts regarding medical and scientific issues, proposed using ultraviolet rays and injections of cleaning agents into patients suffering from the disease.

Trump made the absurd remark after Bill Bryan, the Science Director for the Dept. of Homeland Security, gave a presentation about how recent tests have shown that increased levels of sunlight, ultraviolet (UV) rays, and even humidity caused the coronavirus to die off quickly, potentially reducing its potency in the upcoming summer months.

“The virus dies quickest in sunlight,” Bryan said, adding that it can also be killed with bleach and isopropyl alcohol instantly or within minutes.

At that point, a lightbulb went off in Trump’s head, and he asked Bryan, out loud, in front of a room full of people (and also the world, mind you): “Supposing we hit the body with a tremendous, whether it’s ultraviolet or just very powerful light? And I think you said, that hasn’t been checked, but you’re going to test it.”

Trump added: “And then I said supposing you brought the light inside the body which you can do either through the skin or in some other way. And I think you said you’re going to test that too. Sounds interesting.”

He then presented another possible treatment.

“And then I see the disinfectant, where it knocks it out in a minute, one minute, and is there a way we can do something like that? By injection inside or almost a cleaning. As you see it gets in the lungs, and it does a tremendous number on the lungs. So it would be interesting to check that … You’re going to have to use medical doctors. But it sounds interesting to me.”

Though Trump didn’t specify the “disinfectant” he would consider using to kill coronavirus, the stuff that’s commonly used to do the job, bleach and isopropyl alcohol, are both toxic to the human body when ingested.

And as for the UV rays, has he ever heard of skin cancer? Y’alls president done last his damn mind.

After Trump’s statements, Bryan told reporters that federal laboratories are not considering such ridiculous treatment options. He also made it a point to note that heat and humidity alone wouldn’t kill the virus and said people should continue to social distance.

When Bryan was asked to clarify, he said that’s not the kind of work he does in his lab, before Trump jumped in and added: “Maybe it works. Maybe it doesn’t work.”

At one point Trump turned to task force coordinator Dr. Deborah Birx and said to her: “I would like you to speak to the medical doctors to see if there’s any way that you can apply light and heat to cure. You know, if you could … Maybe you can, maybe you can’t”

“I’m not a doctor,” he added. “But I’m like a person that has a good, you know what…” he said as he pointed to his head.

"I'm the president and you're fake news" — Trump to @PhilipRucker after he asks him if it's responsible to make all sorts of wacky and unproven suggestions about possible coronavirus treatments pic.twitter.com/8ag4izDrGj

Trump also went off on Washington Post’s White House Bureau Chief Philip Rucker when Rucker said that people are looking at these briefings for guidance, not “rumors.”

“Respectfully sir, you’re the President and people tuning in to these briefings want to get information and guidance, and want to know what to do,” Rucker told him. “They’re not looking for rumors.”

“Hey Phil, I’m the President and you’re fake news,” Trump responded. “And you know what else I’ll say to you? I’ll say very nicely, I know you well. Because I know the guy, I see what he writes. He’s a total faker.”

He said of Bill Bryan: “I’m just here to present talent. I’m here to present ideas because we want ideas to get rid of this thing. And if heat is good, and if sunlight is good, that’s a great thing as far as I’m concerned.”

Trump also scoffed at a question about whether it could be a potential health risk if people were to take this information and decide to no longer follow social distancing guidelines.

“Here we go. The new headline is Trump asks people to go outside … that’s dangerous,” the president fumed. “I hope people enjoy the sun and if it has an impact, that’s great.”

Watch the full hour-long briefing below: