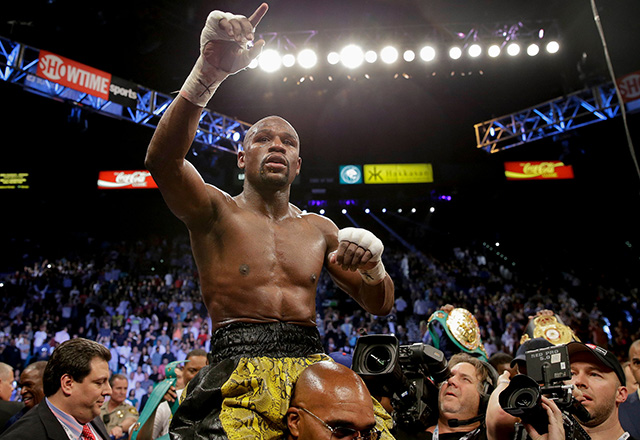 With absolutely ZERO endorsements, undefeated championship boxer Floyd Mayweather Jr. is currently the highest paid athlete — across all American sports — for the second year in a row! Can you say … “BALLING?”

According to Sports Illustrated’s annual list highlight the top-paid U.S. athletes released Wednesday, Floyd Mayweather Jr. is protected to earn at least $90 million this year alone. Last year, he made $85 million and was crowned the highest paid athlete then too.

Mayweather Jr.’s 2013 earnings will come from a recent six-fight, 30-month deal he signed with Showtime back in February, in which the 36-year-old is guaranteed AT LEAST $32 million for every fight. It’s said to be one of the most lucrative deals EVER for an athlete.

Coming in a distant second on the list of top-paid athletes is Miami Heat star LeBron Jaames, who earned $56.5 million ($39 million of which came from endorsements).

Third on the list is New Orleans Saints Quarterback Drew Brees with $47.8 million earned, thanks to a new contract he signed before last season.

L.A. Lakers star Kobe Bryant comes in fourth on the list at just under $47 million, and Tiger Woods is fifth with $40.9 million — his lowest spot since the list was first started in 2004.

Take a look at the complete Fortunate 50 list below: