Marcus Jordan, son of NBA legend Michael Jordan, flashed a big grin for the camera when he posed for his mugshot after he was arrested for disorderly conduct outside a hotel in Nebraska Sunday morning (Jul 1).

According to news reports, when cops responded to a call at the Embassy Suites hotel in Omaha, Nebraska, they found hotel security trying to restrain Jordan, who had been arguing with two women at the hotel, and was “very animated, intoxicated and uncooperative.”

It took several cops to control and handcuff Jordan, the Associated Press reported.

In addition to his disorderly conduct charge, the 21-year-old — who plays college basketball for the University of Central Florida — was booked at the Douglas County Dept. of Corrections for disorderly conduct and obstructing officers. He was released Sunday night.

In response to his arrest, his school’s athletics department released the following statement, “After gathering all of the facts, we will deal with this situation in an appropriate manner.”

Jordan, a rising senior, averaged 13.7 points a game for UCF last season. He was reportedly in Omaha to watch the United States Olympic trials. 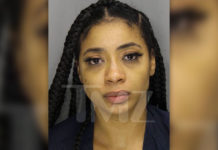