GOSSIPONTHIS.COM Celebs “Pink Slime” Found in 70 Percent of the Ground Beef Sold in... 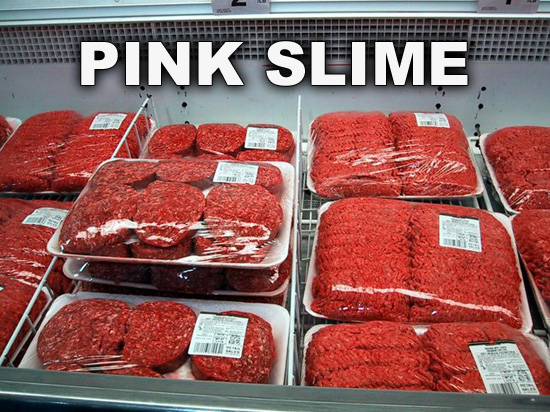 Remember that “pink slime” stuff the USDA recently purchased to serve in school meals? Turns out, the cheap meat filler can be found in at least 70 percent of the ground beef that is sold at grocery stores across the country!

And if that doesn’t make your stomach turn enough, by some estimates, pink slime is in up to 25 percent of almost every hamburger patty consumed in America.

“It kind of looks like play dough,” said Kit Foshee, a former corporate quality assurance manager at Beef Products Inc., the company that makes pink slime. “It’s pink and frozen, it’s not what the typical person would consider meat.”

Once only used in dog food and cooking oil, the pinkish substance formally branded as “Lean Beef Trimmings,” or “pink slime,” in much more appropriate terms, is basically a disgusting mixture of beef scraps, cow connective tissues and other spare beef trimmings that have been treated with ammonium hydroxide to kill pathogens like salmonella and E. coli to make the meat safe and at least somewhat appetizing.

The resulting substance is flash frozen and boxed, then shipped out to whoever decides to blend it into ground beef and hamburger patties as a “filler” to sell to grocery stores and restaurants.

“[It will] fill you up, but won’t do any good,” Foshee said, explaining that the substance is more like gelatin and isn’t as nutritious as real ground beef.

Even though this sounds (and looks) really gross and unhealthy, the USDA believes that “Lean Beef Trimmings” are safe to eat, which explains why they bought 7 million pounds of the stuff to serve in schools, and apparently allow meat producers nationwide to use it without even letting us — the consumers — know.

From the ground beef you buy at the grocery store, to the hamburger you’re eating at your favorite restaurant, all of it contains at least a little bit of pink slime. And up until now, you probably didn’t even know because there is absolutely no labeling on the meat’s packaging indicating so.

“There is no way to even know from labels or even from the butchers here whether it contains pink slime,” said an ABC News producer from New York.

“It’s economic fraud,” says former USDA scientist Gerald Zirnstein, who was the first person to call the meat stuff “pink slime” after he toured a Beef Products Inc. production facility as part of an investigation into salmonella contamination in packaged ground beef.

“It’s not fresh ground beef. It’s a cheap substitute being added in,” he told ABC News.

What are your thoughts on this “pink slime” stuff?