Rappers Lil Wayne and Kanye West were spotted kicking it courtside on Christmas Day (Sun. Dec 25) at the Staples Center in Los Angeles as the Lakers took on the Chicago Bulls in their first home game of the season.

Yeezy spent the Holiday courtside with his father Ray West, while Weezy, a known sports enthusiast, brought along his girlfriend Dhea to watch the game with him.

Other celebs spotted at the game were rocker Adam Levine and his supermodel girflriend Anne Vyalitsyana, as well as comedian George Lopez and rapper Snoop Dogg (not pictured). 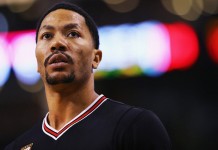