Professional baseball player Alex Rodriguez now has his own Pediatric Outpatient Center named after him. The New York Yankees Third Baseman, pictured above with Dr. Ram Kairam (Chief of Pediatrics) and Dr. Persaud Yudy, attended a dedication ceremony for the “Alex Rodriguez Pediatric Outpatient Center” at the Bronx-Lebanon Hospital Wednesday (Jun 30) in the Bronx Borough of New York City.

Rodriguez generously donated $250,000 to help fund the construction of the Bronx hospital’s new outpatient center, which offers treatment for cardiac illnesses, asthma, diabetes and neurological disorders, among other health issues in children.

“I am proud to support the children’s outpatient facility and Bronx-Lebanon’s efforts to care for the children of the Bronx community,” Rodriguez said in the press release. 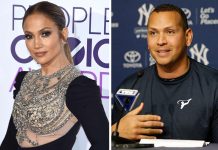