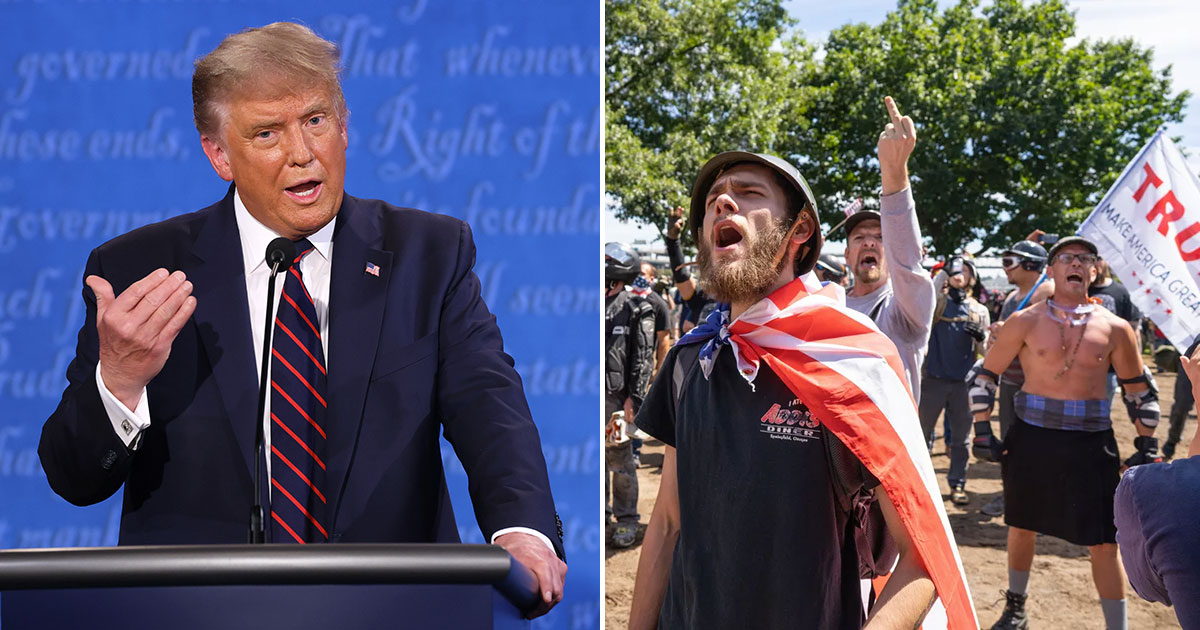 President Donald Trump outright refused to denounce white supremacy groups and appeared to use a dog whistle with his followers by telling the Proud Boys to “stand back and stand by.”

During the first presidential debate for the 2020 election, held in Cleveland, Ohio Tuesday night (Sep. 29), moderator Chris Wallace asked Trump asked whether he would be willing to condemn white supremacist and neo-nazi groups (such as “The Proud Boys“) once and for all, and the POTUS danced around that question like a contestant on Dancing With the Stars.

“Are you willing, tonight, to condemn white supremacists and militia groups and to say that they need to stand down and not add to the violence in a number of these cities as we saw in Kenosha and as we’ve seen in Portland?” Wallce inquired.

Trump replied: “Sure, I’m willing to do that,” to which Biden interjected: “Do it!”

“I would say almost everything I see is from the left wing, not the right wing,” Trump contiued. “I’m willing to do anything. I want to see peace.”

Then Trump blurted out: “Proud Boys … Stand back, stand by! But I’ll tell you what, somebody’s got to do something about Antifa and the left because this is not a right-wing problem… This is a left wing problem.”

Chris Wallace: "Are you willing, tonight, to condemn white supremacists and militia groups and to say that they need to stand down…"

Trump: "Proud Boys, stand back and stand by! But I'll tell you what, somebody's got to do something about antifa and the left." pic.twitter.com/4vrPocKzcu

The Proud Boys is a racist group of white supremacists who describe themselves as “a pro-Western fraternal organization for men who refuse to apologize for creating the modern world; aka Western Chauvinists.” The hate group has been tied to many violent protests in the country, often in support of President Trump.

President Trump once said there were good people “on both sides” following a white supremacist rally in Charlottesville, Virginia that resulted in the death of a counter-protester.