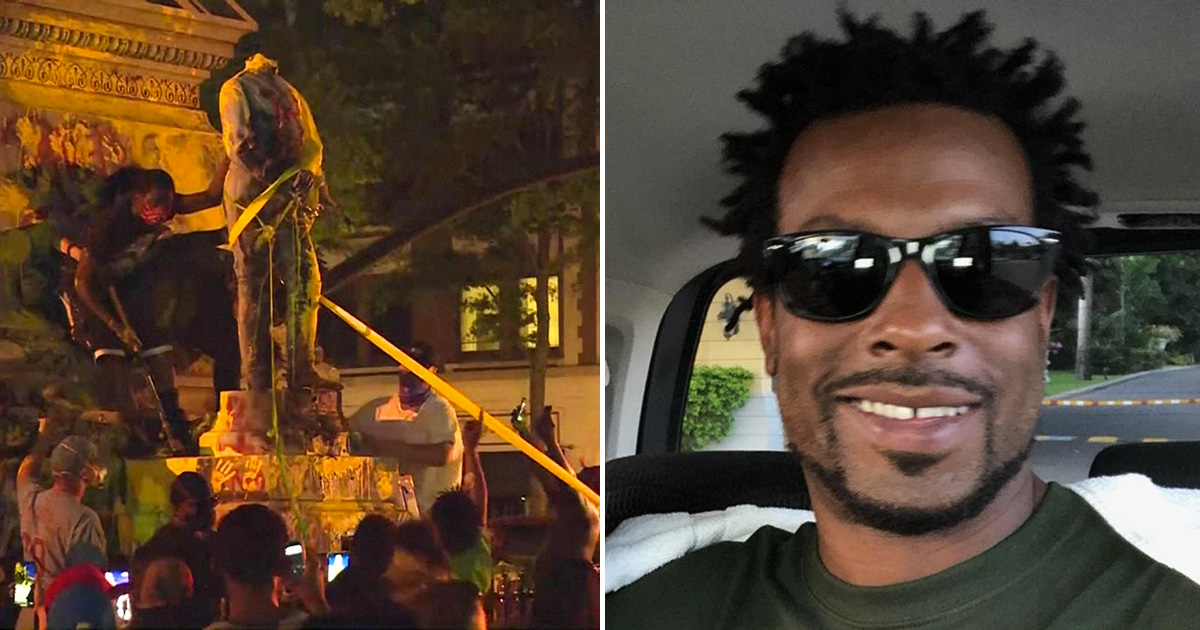 A Virginia man is fighting for his life in the hospital after he was critically injured when he was hit in the head by a Confederate statue at a monument that was toppled by demonstrators.

A witness identified as a Black Lives Matter activist told WAVY that the injured man, who has since been identified as Chris Green, was at the front of the statue when he was struck in the head as it was pulled down by demonstrators in Portsmouth Wednesday night (Jun. 10).

Video footage of the incident showed the exact moment the toppled statue slammed into Green and knocked him to the ground.

“It came and fully hit him in the head, and we could see that his skull was actually showing,” the BLM activist said. “He was convulsing on the ground.”

“He lost a great amount of blood,” the witness added. “And we ask that everybody pray for that man right now.”

Green’s wife said he was a protest at the Confederate monument in Olde Towne Portsmouth when people starting rioting. At one point, some of the people pulled down a statue, which landed directly on top of Green.

Portsmouth police were on the scene, but they did not stop in to stop the protesters until the statue came down on Green just after 9 p.m.

Green’s wife of 13 years, who wasn’t with him at the demonstration, told 13News Now his heart stopped twice while he was in the ambulance being rushed to the hospital. She said they share two children together and she was upset that protesters “didn’t think” when they pulled the statue down.

The crowd was reportedly frustrated by Portsmouth City Council’s indecision on the future of the Confederate monument, and hours before the protest, officials had debated moving the monument and how to handle protests at the site.

Virginia State Police said they were investigating the incident and said that Green is still alive, but his injuries are life-threatening. He’s been placed into a medically induced coma by doctors at Santara Norfolk General Hospital.

VSP said no arrests have been made and the Portsmouth Commonwealth’s Attorney will determine if any charges will be filed.

On Thursday morning, Black Lives Matter 757, the group that organized Wednesday night’s demonstration, shared a GoFundMe page that’s been authorized by Green’s family to help with his medical expenses.

The group said they’ll provide updates on his condition when it becomes available. As of 4:00 p.m. Thursday afternoon, the page had raised more than $17,000 from over 500 donors.

This GoFundMe has been authorized by his family, and we will update everyone on his condition as information becomes available. Please continue to keep this man and his family in your prayers. ??

The statue toppling in Portsmouth is part of a wave of Confederate and Christopher Columbus monuments being forcefully brought down in the wake of outrage over police brutality and systemic racism following the killing of George Floyd in police custody.

100 miles away from Portsmouth in Richmond (the former capital of the Confederacy), protesters tore down a statue of Confederate President Jefferson Davis along the city’s famed Monument Avenue.