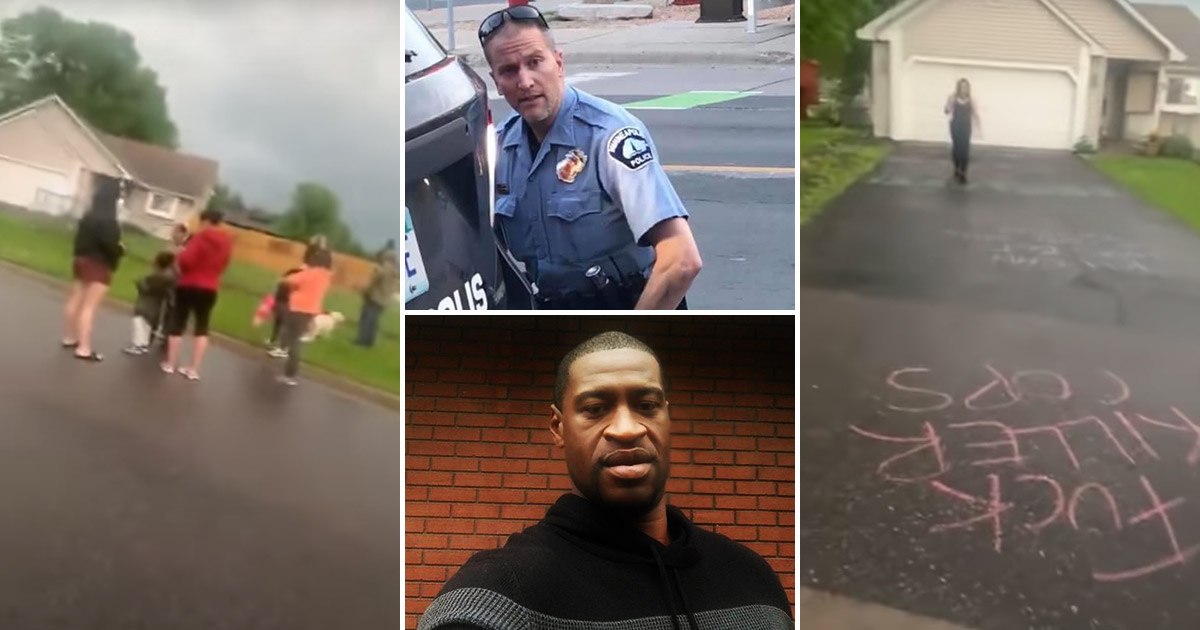 As more information emerges about the police officers involved with the death of George Floyd, video footage has surfaced showing protesters surrounding the home of former Minneapolis officer Derek Chauvin—who, along with three other cops, was fired Tuesday for his direct involvement in Floyd’s death.

Chauvin was caught on video Monday (May 25) with his knee on the back of Floyd’s neck while he attempted to arrest the man for suspected forgery—a non-violent crime that implies he tried to use forged documents—at a nearby deli.

Officers said he resisted arrest prior to the recording, however, new footage has surfaced proving otherwise.

In the nearly 10-minute video showing the incident, Floyd can be heard repeatedly telling Chauvin he couldn’t breathe.

Despite pleas from bystanders to get off of him, Chauvin refused to remove his knee from the 46-year-old man’s neck until paramedics arrived to load his apparently lifeless body on a stretcher. Floyd was later pronounced dead at the hospital.

Tuesday evening (May 26), a group of protesters gathered outside Chauvin’s home in Oakdale—a Minnesota suburb east of St. Paul.

Videos posted on various social media platforms showed demonstrators, some wearing shirts with the phrase “I Can’t Breathe” walking around Chauvin’s property and standing on the street in front of the former cop’s home.

In the driveway, someone wrote “F**k Killer Cops” with sidewalk chalk, and one man could be seen hanging a “Black Lives Matter” sign on a fence surrounding the property.

At one point in the footage, the NWA song “F**k the Police” can be heard playing in the background. There’s also a moment in the video where the protesters prevent a Door Dash driver from delivering food to the home.

Overall, the demonstration was peaceful, and the Oakdale police chief said that, given the circumstances, the protesters had “a reason to be upset.”

Tuesday’s peaceful protest outside Chauvin’s home was vastly different from the protest near the deli where Floyd was arrested and outside the Minneapolis Police Department’s Third Precinct, where demonstrators clashed with officers in riot gear.

The protests lasted well into the overnight hours, with protesters throwing rocks and bricks and police firing back with rubber bullets, tear gas and flash-bang grenades.

Another protest outside Chauvin’s home is reportedly planned for Wednesday afternoon at 4 p.m.

The organizer wrote on Facebook that they want Chauvin to feel “our pain and what it’s like” to fear for your life, all while keeping the demonstration as peaceful as possible.

The murderer's accomplice Tou Thao is at home too.

PULL UP AND PROTEST AT HIS FRONT DOOR?? DONT LET THEM SLEEP IN PEACE?? #ICantBreathe #BlackLivesMatter #GeorgeFloyd #PoliceBrutality pic.twitter.com/MjjHQY2bn6