GOSSIPONTHIS.COM News Donald Trump on Ahmaud Arbery Killing: “I Saw the Picture of Him... 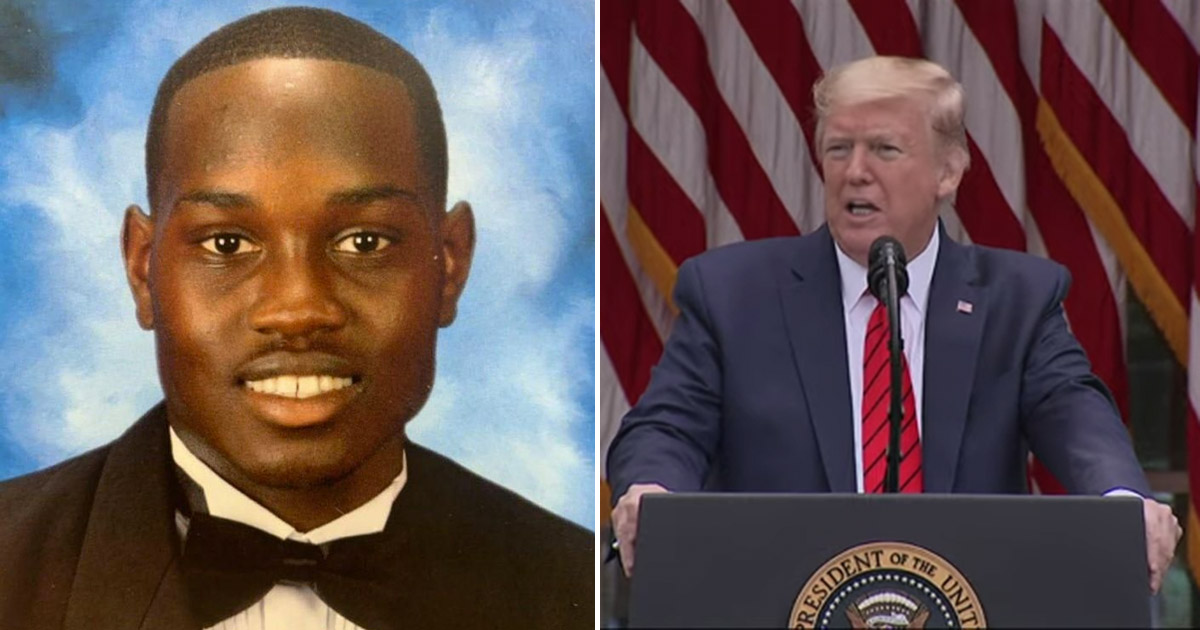 President Donald Trump called Ahmaud Arbery’s shooting death at the hands of two white men who hunted him down after suspecting him of committing burglaries in the area a “horrible thing,” but said he’s waiting on the results of investigations to provide him with more context.

Trump was asked on Monday (May 11) about the video showing Arbery being shot to death as he jogged along a tree-lined street in Brunswick, Georgia. The question came near the end of a briefing on the coronavirus pandemic in the White House’s Rose Garden.

“I think it’s horrible and it’s certainly being looked at by many people. I’m speaking to many people about it,” Trump said of the footage that surfaced online last Tuesday two months after the February 23rd shooting.

The men who chased down and killed Arbery, 64-year-old Gregory McMichael and 34-year-old Travis McMichael, hadn’t been arrested or charged for more than two months, but the pair were finally taken into custody last Thursday by the Georgia Bureau of Investigation after the video leaked online. They were denied bond by a judge the next day.

During Monday’s briefing, Trump also praised Arbery’s appearance in a photo released by his family that showed him wearing a tuxedo.

“He looked, I saw the picture of him in his tuxedo and it was so beautiful and he looks like a wonderful young guy. Would have been a wonderful … just a wonderful guy,” Trump said.

“I think it’s a horrible thing. Now, with that being said, as you know they’re studying the case carefully, they’re interviewing everybody involved and we’ll see what happens. To me it’s a very sad thing … It breaks your heart to watch it.”

Trump faced a bit of criticism over the weekend after he suggested that something could’ve happened off-camera that contributed to the shooting.

“You know, it could be something that we didn’t see on tape,” Trump said during a Fox News interview Friday (May 8) on what would have been Arbery’s 26th birthday.

When asked about those comments during Monday’s briefing at the White House, Trump said: “Well, I saw the tape and when they moved left, I don’t believe when they moved left outside of the tape – nobody saw what was going on. It’s an empty spot on the tape, I guess. I will say that it’s something that, based on what I saw, doesn’t look good.”

Federal officials have said that they’re looking at the possibility of hate crime charges being brought against the McMichaels for Arbery’s death. They’re also looking into the way local officials handled the case.

Protests have erupted over the killing as well as the botched investigation.

Two district attorneys had to recuse themselves from the case because of their ties to Gregory McMichael—a former investigator for the DA’s office.

On top of that, before recusing herself, D.A. Jackie Johnson’s office refused to allow the Glynn County Police Department to arrest the McMichaels “to protect her friend.”

After picking up the case, the second D.A., George E. Barnhill, wrote in a letter that he saw “no grounds” to arrest the McMichaels on because they were “following in hot pursuit of a burglary suspect with solid first-hand probably cause” and “Arbery instigated the fight.”

However, a police lieutenant told CNN that the string of burglaries the McMichaels said was their reason for stalking and murdering Arbery never happened.

The Department of Justice said Monday it would consider a request from Georgia’s attorney general to review Arbery’s shooting death and see whether federal hate crime charges should be pursued, though the state doesn’t have a hate crime law.

“We will continue to assess all information, and we will take any appropriate action that is warranted by the facts and the law,” DOJ spokeswoman Kerri Kupec said.

A third man, William Bryant (a neighbor of the McMichaels’), is also under investigation for his role in making the video and helping to corner Arbery during the incident, state investigators said.

“We are committed to a complete and transparent review of how the Ahmaud Arbery case was handled from the outset,” Carr said Sunday.

“The family, the community and the state of Georgia deserve answers, and we will work with others in law enforcement at the state and federal level to find those answers.”