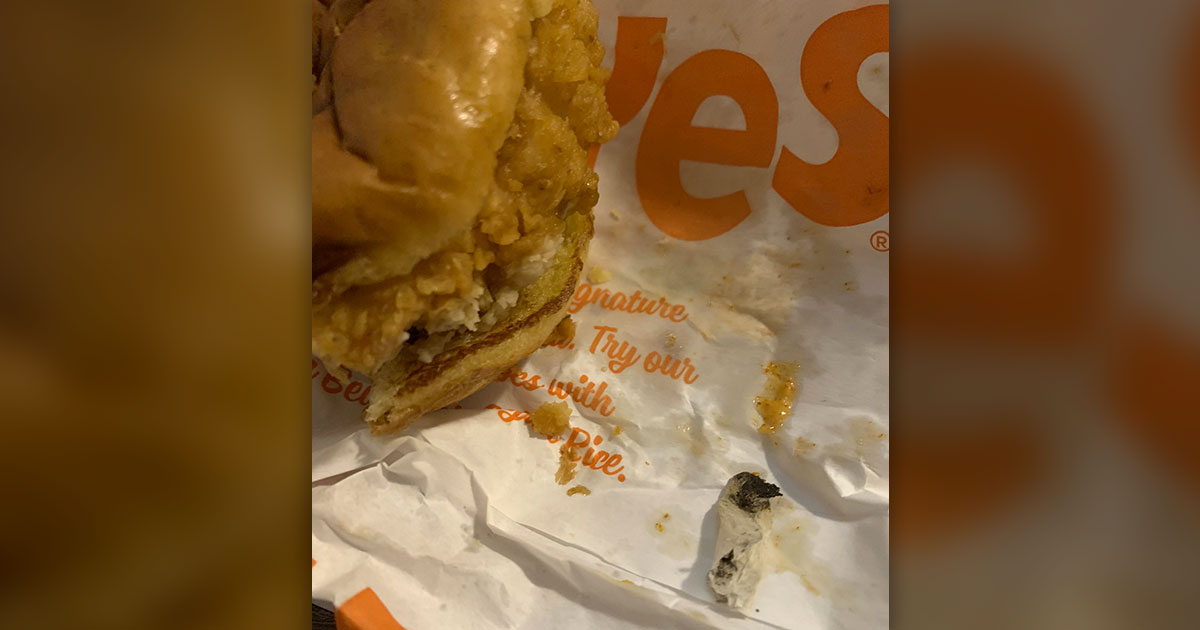 A Popeyes customer in New York says he found a roach in his chicken sandwich. No, not the kind you’re thinking about. The other kind.

A man named Jeremy Merdinger took to Twitter Monday (Nov. 11) to put Popeyes on blast after a half-smoked joint fell out of his chicken sandwich.

“Do all your chicken sandwiches come with a joint in them?” he tweeted. “Found this in my sandwich the other day in NYC. Just wanted to make sure that this doesn’t happen to anyone else.”

@PopeyesChicken Do all your chicken sandwiches come with with a joint in them? Found this in my sandwich the other day in NYC. Just wanted to make sure that this doesn’t happen to anyone else. pic.twitter.com/hS48SpsM5X

In an interview with the New York Post, Merdinger said he picked up two sandwiches—a regular and a spicy—from the Popeyes on 14th Street in New York City last Monday (Nov. 4) to take back to his apartment.

He said he ate the spicy sandwich first, and “it was fine.” But when he was enjoying his last couple of bites of the regular sandwich, that’s when the half-smoked joint made its surprise appearance.

“I was taking my last couple of bites from the second sandwich when it fell out and into my lap,” he said. “It was 100 percent marijuana. I saved the evidence. It’s in a plastic bag at home.”

Merdinger says he then reached out to Popeyes HQ via email and included a picture of his receipt and the joint, but they never responded to his complaint … which is why he hit up the New York Post and blasted them on Twitter.

And it looks like it worked, because a Popeyes spokesperson told the Post the fried chicken chain is investigating the claim.

“We have high standards for the quality of our ingredients and the preparation of our food,” the restaurant said in a statement. “We take all feedback about our meals seriously and quickly take action to make sure all of our guests have a good experience.”

Merdinger said he didn’t initially want to take his grievances to social media, but his boss put him in contact with a friend who’s a reporter, and they brought the complaint to the higher-ups at Popeyes.

“I didn’t want to turn this into a viral thing. I was hoping we could get this resolved quietly. It is a safety issue,” Merdinger’s boss, Ryan Berger, told the Post.

Merdinger said he would have never posted his complaint on social media if Popeyes had taken his complaint seriously the first time around.

“They were basically saying it happened outside of the restaurant, and there is nothing they can do,” he said. “They can at least admit they made a mistake. I would like for them to own up to it. I think it’s ridiculous and not professional.”

Merdinger says all he wants now is a refund and an apology.