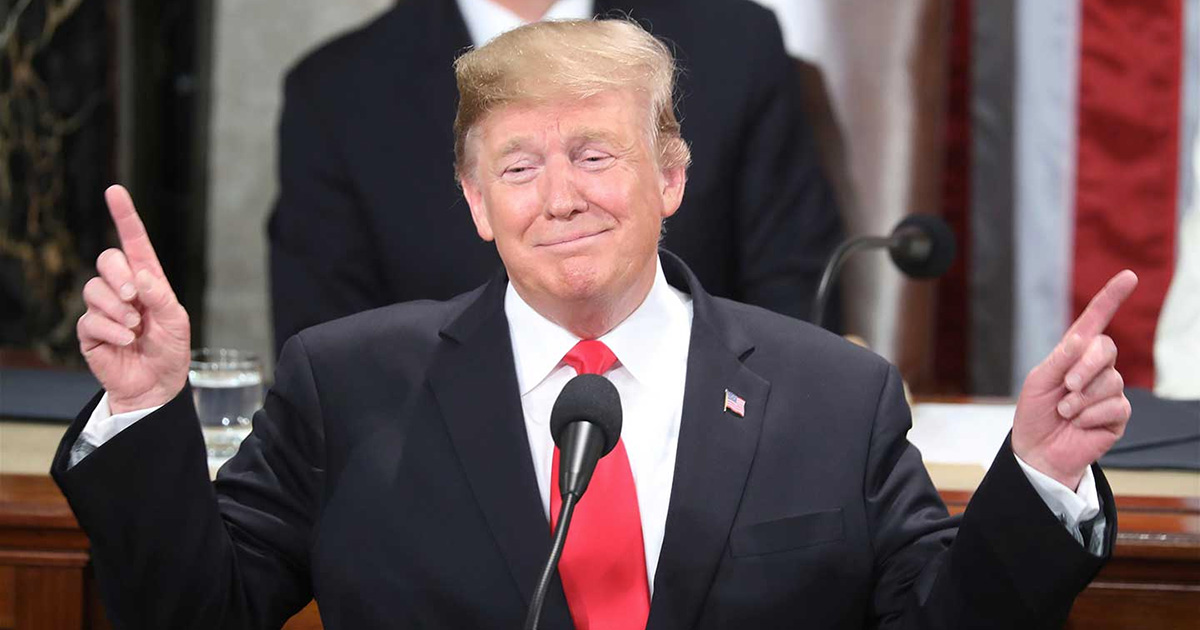 Just when you thought Donald Trump and his crazy ideas couldn’t get any dumber.

Axios is reporting that the Cheeto-in-Chief asked Homeland Security and national security officials multiple times if it would be possible to drop nuclear bombs on top of hurricanes to stop them before they reach the United States.

Trump’s inquiry about using nuclear weapons to stop hurricanes in their tracks was revealed by anonymous sources who were either in the room when Trump made the ridiculous suggestion or had been briefed on a National Security Council memorandum that recorded the comments.

According to one source who attended a hurricane briefing at the White House, Trump said: “I got it. I got it. Why don’t we nuke them? They start forming off the coast of Africa, as they’re moving across the Atlantic, we drop a bomb inside the eye of the hurricane and it disrupts it. Why can’t we do that?”

The source said that the person who’d been briefing Trump on the hurricane situation said something along the lines of “Sir, we’ll look into that,” knowing good and damn well they never planned to do anything of the sort … because HELL NO.

Trump then reportedly asked how many hurricanes the U.S. would be able to handle before reiterating his idea about stopping them before they make landfall.

Axios’ source said the person doing the briefing was shocked, to say the least.

“You could hear a gnat fart in that meeting,” the source said. “People were astonished. After the meeting ended, we thought, ‘What the f**k? What do we do with this?'”

Trump also raised the idea in another conversation with a senior administration official. A 2017 NSC memo describes that second conversation, in which Trump asked whether the administration should bomb hurricanes to stop them from hitting the homeland.

A source briefed on the NSC memo said it does not contain the word “nuclear”; it just says the president talked about bombing hurricanes.

The source added that this NSC memo captured “multiple topics, not just hurricanes. … It wasn’t that somebody was so terrified of the bombing idea that they wrote it down. They just captured the president’s comments.”

The sources said that Trump’s “bomb the hurricanes” idea — which he floated early in the first year and a bit of his presidency before John Bolton took over as national security adviser — went nowhere and never entered a formal policy process.

When asked to comment on Trump’s suggestion of nuking hurricanes, a White House official told Axios: “We don’t comment on private discussions that the president may or may not have had with his national security team.”

“His goal—to keep a catastrophic hurricane from hitting the mainland—is not bad,” the official said. “His objective is not bad.”

The official continued: “What people near the president do is they say ‘I love a president who asks questions like that, who’s willing to ask tough questions.’

“It takes strong people to respond to him in the right way when stuff like this comes up. For me, alarm bells weren’t going off when I heard about it, but I did think somebody is going to use this to feed into ‘the president is crazy’ narrative.”

It isn’t clear where Trump’s interest in using nuclear bombs to disrupt hurricanes came from, but as Axios notes, the idea isn’t entirely a new one.

The notion that detonating a nuclear bomb over the eye of a hurricane could be used to counteract convection currents dates to the Eisenhower era, when it was floated by a government scientist.

The idea keeps resurfacing in the public even though scientists agree it won’t work. The myth has been so persistent that the National Oceanic and Atmospheric Administration, the U.S. government agency that predicts changes in weather and the oceans, published an online fact sheet for the public under the heading “Tropical Cyclone Myths Page.”

The page states: “Apart from the fact that this might not even alter the storm, this approach neglects the problem that the released radioactive fallout would fairly quickly move with the tradewinds to affect land areas and cause devastating environmental problems. Needless to say, this is not a good idea.”

Thank God Trump doesn’t have as much power as he would like, because we could be in for a world of trouble if he were able to make his idiotic ideas come to life.