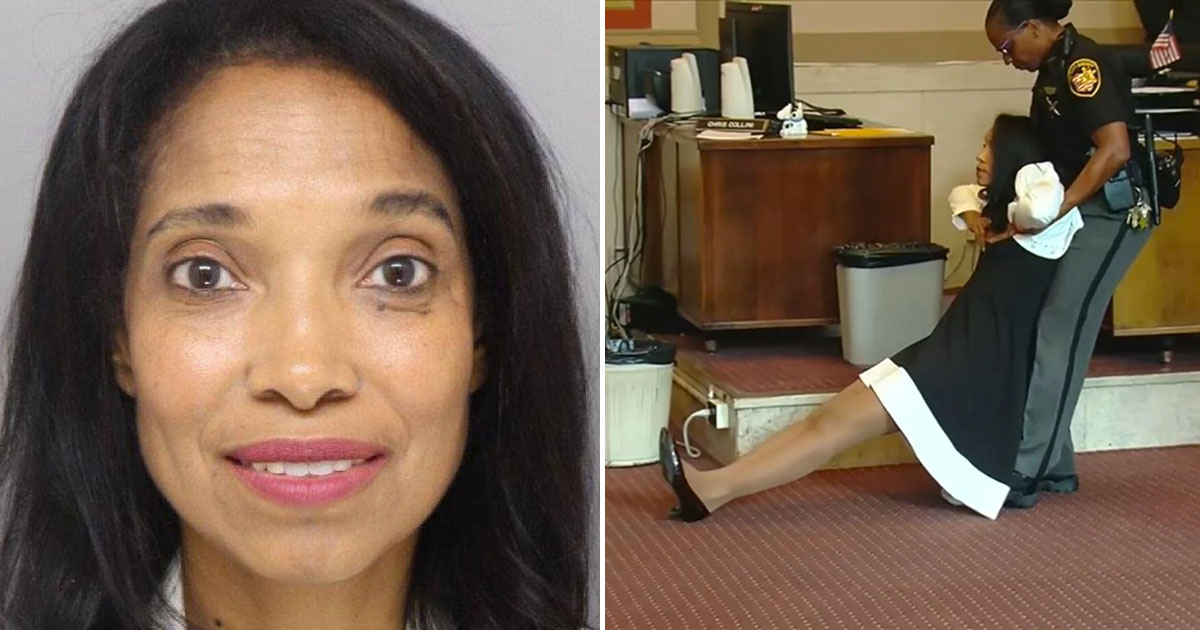 Tracie Hunter, a former Ohio juvenile court judge, was sentenced to six months in prison for using her power to help her brother keep his job as a police officer.

Hunter’s case is making headlines after footage emerged online of her being dragged out of court by a female deputy after her sentencing on Monday (Jul. 22).

Hunter has claimed her innocence throughout court hearings and now her supporters are asking for the judge to reconsider her sentencing.

Here are some things to know about Tracie Hunter and her case:

1Tracie Hunter was convicted in 2014 of unlawful interest in a public contract, a fourth-degree felony.

The conviction stems from Tracie’s involvement with her brother Stephen Hunter, who was being investigated in 2013 for allegedly striking a young offender while working as a Juvenile correctional officer.

Stephen’s boss recommended for him to be fired and his job was on the line. According to prosecutors, this led Tracie to improperly demand and receive documents about the teen, which she passed on to her brother. In 2014, Tracie was convicted of unlawful interest in a public contract, a felony offense.

Tracie had been allowed to remain out of jail while she pursued appeals in both state and federal court. However, in May of this year, a federal judge who had been overseeing the case for three years without making a decision, said there was “strong evidence” against Hunter and that the sentencing could proceed.

On Monday, Judge Patrick Dinkelacker finally delivered Tracie’s sentencing to her and despite efforts from her lawyer asking the judge to delay her sentencing so he could file a motion to dismiss the case, Dinkelacker did not let up one bit.

Tracie also showed little to no emotion during her hearing and was dragged by a female police officer out of the courtroom after the sentencing, causing an uproar by many of her supporters and fans who were in attendance.

Tracie was sentenced to serve her 6-month stint at Hamilton County Justice Center. Once she gets out, she is required to serve one year of probation.

2Tracie has maintained her innocence since day one.

“I violated no laws, I did not secure a public contract, I did not secure employment for my brother who worked for the court for about seven years before I was elected judge. They need to drop these unrighteous and I believe unlawful charges against me,” she told news reporters the day before her hearing.

However, special prosecutor Scott Scrowell, who played a vital role in Hunter’s 2014 trial, believes Hunter is getting exactly what she deserves.

“What she wants to do is play by her own set of rules. That’s the very attitude and the very conduct that put her in the predicament that she’s in and, frankly, has caused all this pain to her and caused all this turmoil to the community,” he said in a statement.

In 2010, Hunter became the first African American elected to Hamilton County’s Juvenile Court. She believes because of this her conviction was politically and racially motivated.

3Hunter is said to have been very disrespectful to Judge Patrick Dinkelacker during her court hearings and brought up a fatal car wreck he was involved in.

Sources connected to the case say Tracie was disruptive during her court hearings and often talked down to Judge Patrick Dinkelacker.

During a 2015 hearing, Tracie questioned why a visiting judge had not been allowed to handle a case related to a fatal car crash involving Dinkelacker a few years earlier.

According to The Cincinnati Enquirer, Dinkelacker’s car was one of two vehicles that struck and killed a woman who was walking in the middle of Central Parkway in 2013. The woman was found to have high levels of cocaine in her system. Neither Dinkelacker nor the other driver were charged with any wrongdoing.

Dinkelacker is said to have told Hunter the car accident was irrelevant to her case and called her comments “inappropriate” and “spiteful.”

On another occasion, Tracie was late to a hearing in May 2016 and talked back to Judge Dinkelacker when he told her she needed to be on time.

“Ms. Hunter, if you are not here by 9 o’clock, I will order you to be sent to the justice center,” the judge said.

“You don’t say a word to me,” Dinkelacker said.

Judge Dinkelacker also revealed that he had received 45 postcards sent to his home from random people asking him not to send Tracie Hunter to jail. He said some of the cards mentioned the fatal car crash he was involved in.

“I have received 45 postcards from people, some of them signed, most of them anonymous. No other judge should go through what I have gone through,” Dinkelacker said.

“If this was an attempt to intimidate me, that effort has flat out failed,” he said during one of Hunter’s court hearings.

Dinkelacker even gave Hunter the opportunity to speak at her latest hearing, to which she declined through her lawyer. Later during the hearing, Hunter wanted to speak and Dinkelacker refused to allow her to do so.

“I gave her an opportunity to speak, and that was turned down. It’s not being offered now,” Dinkelacker said.

“So you’re denying my right as a defendant to address the court?” Hunter said.

4Tracie’s supporters were outraged when her sentencing was announced.

When Dinkelacker announced for Tracie to be taken into custody, one of her supporters dressed in a black t-shirt that read “Justice for Judge Tracie M. Hunter” rushed at officers in an attempt to stop them from arresting Hunter. The woman was quickly handcuffed and taken into custody.

Other supporters can be heard in the background of video footage showing Tracie being dragged by an officer out of the courtroom, shouting in utter shock. Some even screamed out “No justice, no peace!”

Hunter’s lawyer David Singleton spoke to a judge on her behalf. He said Hunter believes she was wrongly convicted. Unfortunately, none of this moved Judge Dinkelacker.

“She’s lost everything almost,” Singleton said. “She lost her job as a judge, her law license, her ability to earn an income. She’s lost peace of mind.”

One of Hunter’s personal friends, State Senator Cecil Thomas, said that authorities are going to pay for wrongfully imprisoning Hunter.

“They are saying to us, ‘Stay in your place. Don’t you dare challenge our authority down here,” he told Local 12 News. “This is going to be the beginning of a huge price this region will pay.”

5Tracie says she was injured when an officer dragged her out of the courtroom.

According to WLWT5, Tracie Hunter has filed a grievance saying she was injured while being placed into custody.

She is currently being housed in the medical unit of the Hamilton County Justice Center.

The Sheriff’s Office said they can’t disclose any details of the alleged injury or anything related to her medical treatment, but it is under investigation.

Biz Journal reports that Hunter suffers from injuries from a car wreck years ago and this could be related to the injuries she is encountering while behind bars.

According to the website, a 2014 Cincinnati magazine profile of Hunter noted that she was in a serious car wreck in October 1987 that resulted in temporary paralysis, a full body cast for a time and metal rods being inserted in her back.

Bishop Bobby Hilton, president of the Greater Cincinnati Chapter National Action Network, said he visited Hunter during her first night in jail and she told him she had a metal rod in her head due to a car wreck.

“She has a fused metal rod in her back to due to a very serious automobile accident some years ago,” he told WLWT5 Hunter spoke to him about during their conversation.

Bishop Hilton also said Hunter did not resist arrest when officers were taking her into custody.

“Judge Hunter never would have intentionally positioned herself to be dragged out of court,” Bishop said.

6Hunter can get out of jail in two months if acts as a minister to other inmates.

According to Bizjournals, the Sheriff’s office has offered Hunter a deal where if she ministers other inmates she can significantly reduce her jail time.

Hunter is a pastor at Western Hills Brethren in Christ Church, so the job should be no issue for her.

With the deal, Hunter can subtract three days from her sentence for every day she serves as a minister, which could bring her six-month sentence down to just two months.

“[The Sheriff] has approved that as an option for her,” Sheriff’s office spokesperson Keith Clepper said. “She’ll still be in a secure environment. Her sticking point is she is not going to admit any guilt. She doesn’t have to. She’s entitled to do a detail.”

So far Hunter has not agreed to the deal.