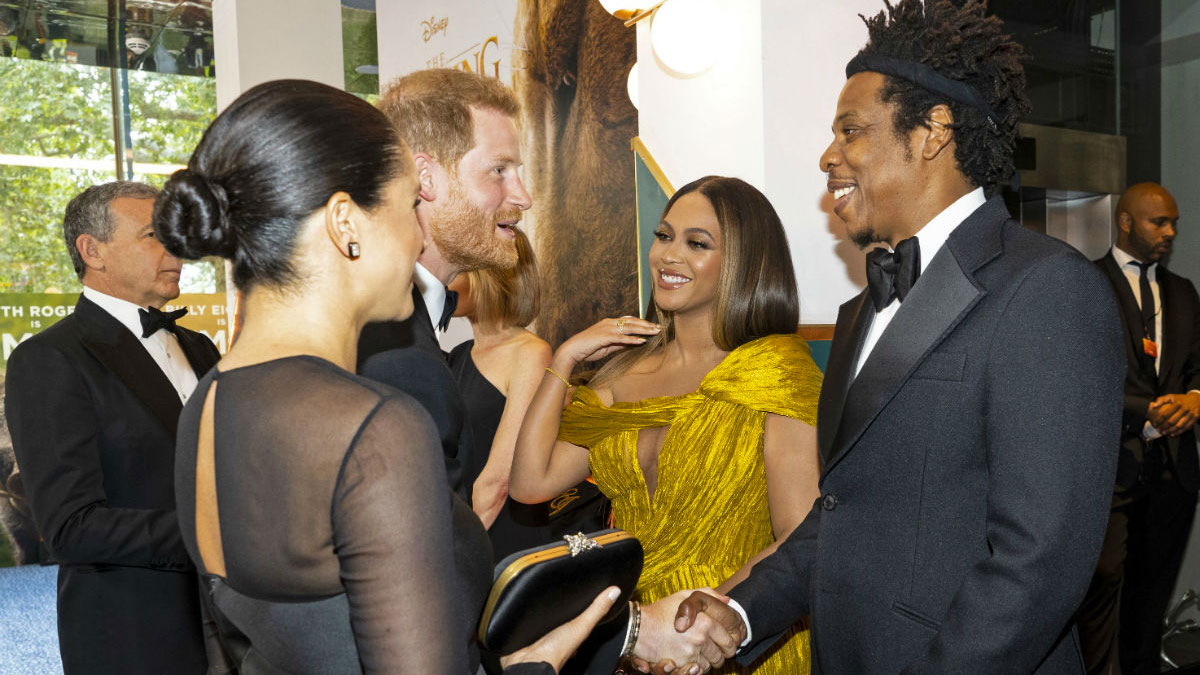 The King and Queen of music, Beyoncé and Jay-Z, were spotted chatting it up with The Duke (Prince Harry) and Duchess (Meghan Markle) of Sussex Sunday (Jul. 14) on the red carpet of the UK premiere of The Lion King in London.

Video footage shared all over social media showed the Duchess warmly embracing Queen Bey and Jay-Z before Harry walked over to join them.

HelloMagazine.com has the scoop on what was said between the royal couples:

[Beyoncé] congratulated Meghan on the arrival of Archie, telling her: “The baby, so beautiful. We love you guys.”

Jay-Z also went to hug Meghan and congratulate her on Archie, before the royal introduced the couple to Harry.

“You’ve been rather busy,” Harry told Beyoncé, before Jay-Z told him: “Congratulations on the birth of your baby.”

On the conversation of parenting, Harry then asked Beyoncé and Jay-Z about their youngest children, twins Rumi and Sir, who were born in 2017.

“They are not here. They don’t come on every trip,” Beyoncé explained. “We left them at home. They would love to have been here.”

Jay-Z then gave Harry some parenting advice: “The best advice I can give you, always find some time for yourself,” he said.

Beyoncé lends her voice to Nala in The Lion King—a live-action remake of the award-winning 1994 Disney classic—which also stars Donald Glover as adult Simba, Seth Rogen as Pumbaa and Billy Eichner as Timon. James Earl Jones will reprise his role as Mufasa.

The new “Lion King” is directed by Jon Favreau and features original music that will be included on two soundtracks, one of which was produced by Beyoncé and includes her new single “Spirit.”