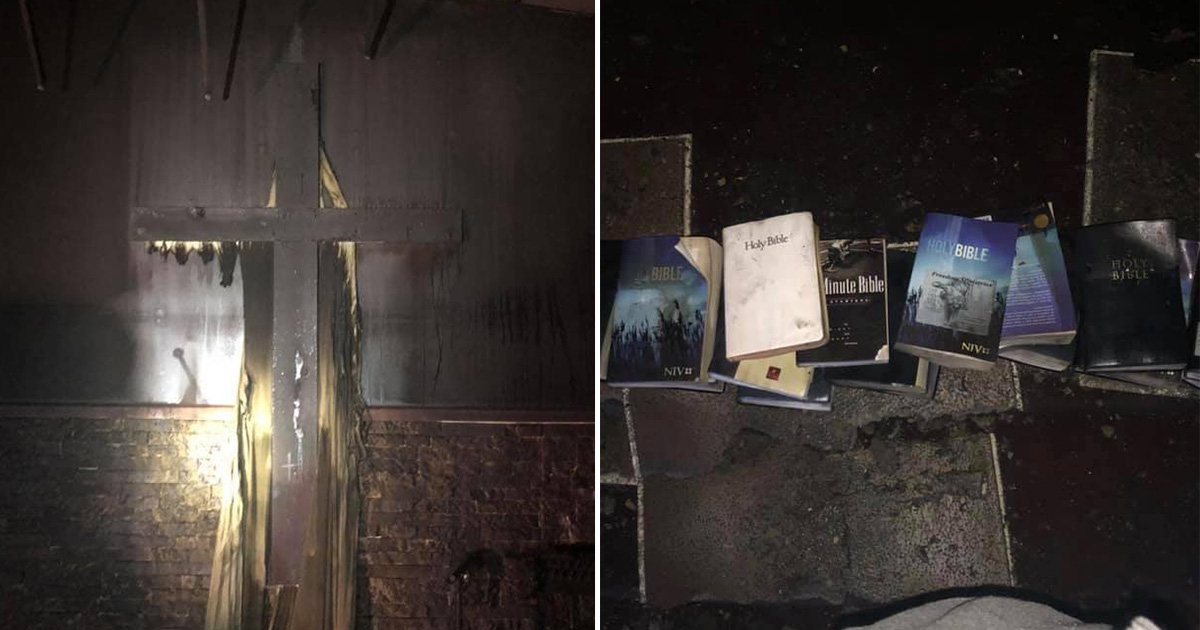 A West Virginia church burned to the ground early Sunday Morning (Mar. 3), and firefighters were shocked by what they found when they entered the building after putting the flames out.

Not a single Bible or cross inside the Freedom Ministries Church, located in Grandview, W.V., was touched.

In a post on Facebook, the Coal City Fire Department described the blaze as “so hot that at one point … firefighters had to back out,” yet, somehow, “Not a single bible was burned and not a single cross was harmed!” The fire dept. added: “Though odds were against us, God was not.”

One commenter on the Facebook post wrote: “Out of every structure fire I have responded to in the past 20 years, not one Bible has burned, they might have smoke damage or [charred] around the edges but you could still read every page. … It just goes to show that God’s word is more powerful than the devil’s fire and fury no matter how hot it gets.”

One woman said, while responding on 9/11 to the United Airlines Flight 93 plane crash, she and others “found wallets and papers, blowing in the wind, that were charred and burnt. Un readable. We did however, find a Bible. Untouched. Completely readable.”

Another woman shared: “When our house burned in Texas I had the family Bible laying on dad’s army trunk that he carried around the world doing his tours of duty. The top of the trunk burned a hole through the top where the Bible was laying and it didn’t damage the Bible in any way. I still have both the trunk and the Bible.”

Another commenter wrote: “This happened to mom in her apartment who was fast asleep while the whole complex was on fire and the entire attic above her apartment was burning. Firefighters had to break in to save her. Total destruction to her apartment except for her Bible.”

Other commenters, however, denounced claims that a divine entity was responsible for saving the Bibles inside the church, chalking the whole thing up to simple science.

One person shared: “Not trying to downplay the blessings and miracles God gives us… but books are rarely damaged in fires. If you toss a closed book into a burning fire the inner pages are not burned. My husband, who is a professional fire fighter, and I had this conversation one time when we were watching a cold case show. I asked why the books/documents were not burned even tho there was a huge fire.

“He explained unless its moved and manipulated (poked at with a stick or something to open pages up) the fire will not burn the inner pages bc there is no oxygen flowing thru. You can test this yourself which we did so he could teach me. Have a bonfire toss some old books and dont mess with them. The outside may burn a bit, the edges but the inside of the pages will be completely fine.”

Another cynic commented: “You guys it’s not magic [its’s] science. The Bible is less likely to be a loss or total loss due to the thickness (1000s of pages) don’t you think if God were going to have some sort of divine intervention he would, I don’t know, save the entire church structure? Or keep a family from being homeless, or keep the people in burning structure from dying instead of saving a book?”

Authorities haven’t yet determined what caused the fire, but urged locals to keep the pastor and the congregation of the church in their prayers.