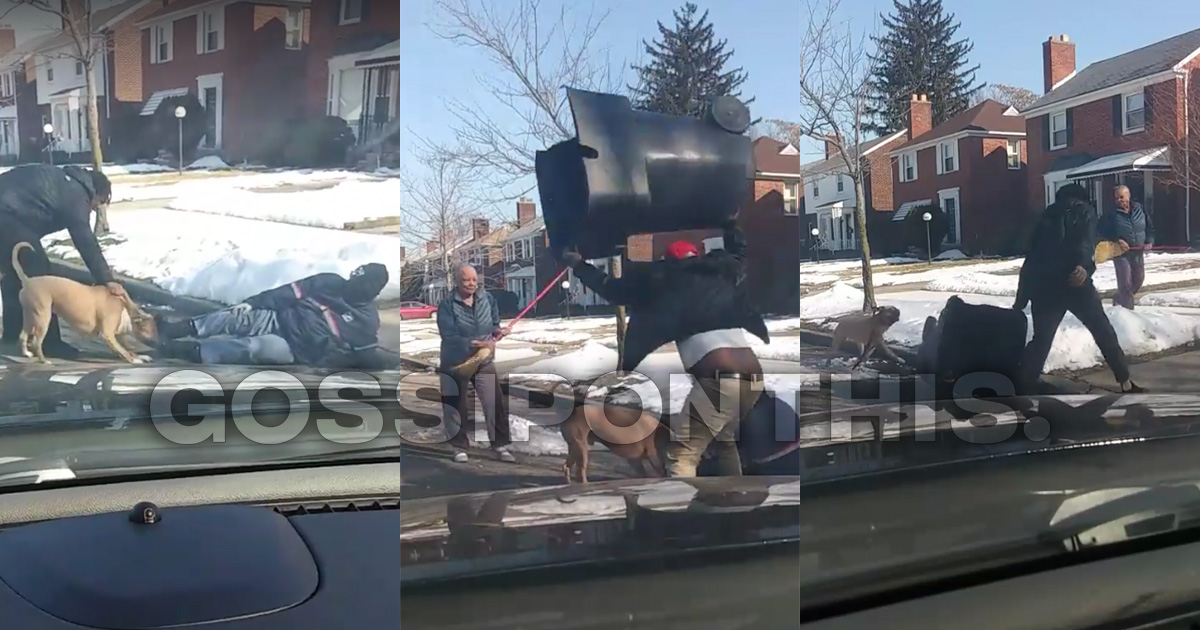 A shocking video showing a dog violently attacking a mail carrier in Detroit has gone viral on social media.

The six-minute video, which was originally shared on Facebook Friday (Feb. 22) by a man named Oneil Colley, apparently shot from inside a vehicle (presumably Colley’s), shows a dog biting and pulling on the Detroit mailman by his foot. The dog’s jaws appear to be locked onto the man, and he refuses to let go.

Several people tried to stop the dog from attacking the man, including a woman who hit the canine with a broomstick and Colley hitting it over the head with a trashcan. At the beginning of the clip, a man can be seen trying to slap the dog with his hands.

About a minute into the video, which has more than 2 million views and has been shared at least 100,000 times, the dog lets go of the mailman’s leg only to grab him by the hand and latch onto him once again.

The dog eventually lets go of the mail carrier off camera, but not before Colley has to take extreme measures by beating the dog repeatedly with metal tools as the mail carrier screamed in the background.

The man from the beginning of the video who was slapping the dog tries to come to the rescue with what appears to be a leash, but the dog overpowers him and the man takes off running.

The dog eventually collapses to the ground and appears to be badly injured. But then he gets up and starts to run after the older woman with the broom as the mailman yells to her: “Ms. Lucas, go!”

“Go in the house, oh Jesus!” Oneil says right before he drops his phone on the floor of his vehicle. He yells at someone to “Get her [Ms. Lucas] in the house!”

When Oneil picks his phone up, he says he’s going to call 911 because the mailman clearly needs an ambulance at this point. “Let me call the ambulance ’cause you the government bro, I ain’t going nowhere, I’m right here,” Oneil says to the mailman, who thanks him, and the video ends.

You can watch the footage here, but be warned that it is VERY GRAPHIC, language and content-wise. VIEWER DISCRETION IS ADVISED.

A Detroit Fire Department spokesperson told WXYZ-TV Detroit that the mailman was bleeding from his hand and his knee was banged up when they got to him. They also said that the dog bit through his boot, but they didn’t reveal the full extent of his injuries.

A spokesperson for the United States Postal Service said they’re investigating the incident internally and also working with Detroit police.

“We are deeply grateful to the concerned citizens who came to the aid of our letter carrier,” the USPS spokesperson said. “Unfortunately attacks such as this provide the postal service an opportunity to remind dog owners that it is their responsibility to restrain their pet in order to avoid attacks against our employees while they are in performance of their duties.”

USPS said there are ways dog owners can make sure attacks like this don’t happen, like keeping dogs in a separate room and closing the door when a mail carrier delivers a package, and also teaching kids and family members not take mail directly when a pet is nearby, and more.

USPS also said that if a mail carrier feels threatened, they have the right to refuse delivery and ask the homeowner to pick their mail up at a nearby post office.

The dog’s owner spoke to WXYZ-TV, and she said that she wasn’t at home at the time of the incident, and that Boss Hog (the dog) was accidentally let out by her nephew (the man in the video with the “leash”) when he opened the door to leave the house.

The woman said her nephew couldn’t find an actual leash so he tried to put a belt around the dog’s neck as a substitute, but as you can see in the video, that clearly didn’t work because the dog started going after him and he took off running.

The woman said prior to this incident she’s never had any issues with Boss Hog, who she said she bought from a breeder in 2012, but she still decided to give him to animal control. She said she’ll find out within the next week or so what Boss Hog’s fate will be.

The mailman was hospitalized with injuries to his hand, foot, and knee, but he’s expected to be OK.