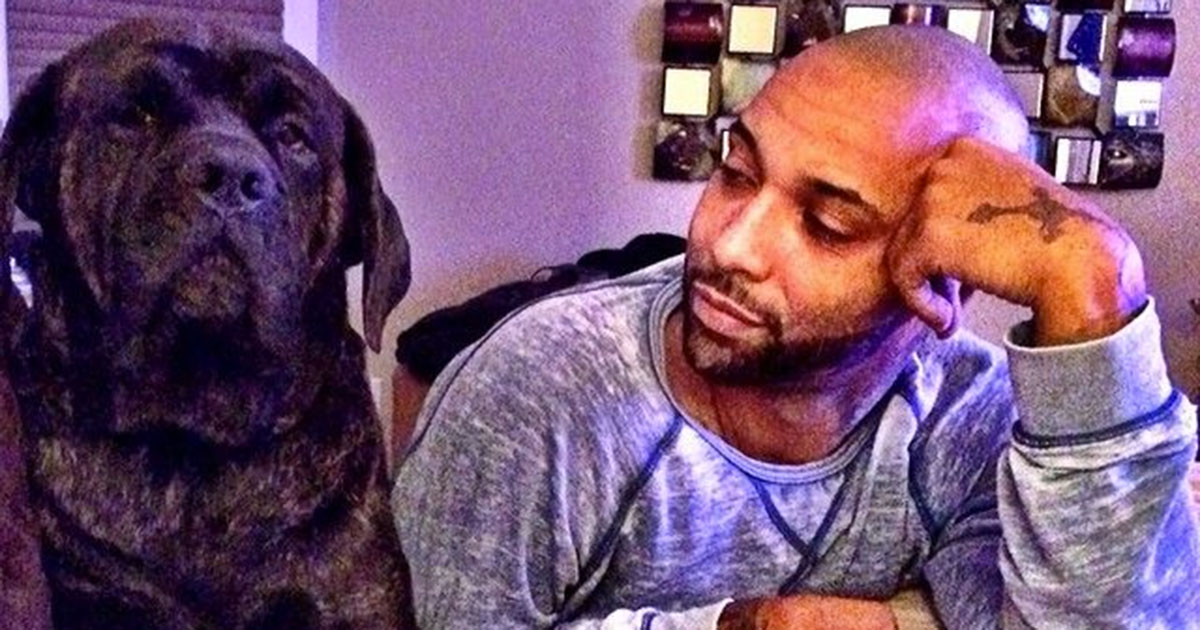 The rapper turned podcaster has become the subject of social media humiliation after it was revealed via court documents (and Joe Budden’s own mouth!) that he has a strange affinity for jerking off dogs to make them feel good.

For those who may be unaware, Joe Budden and his ex-fiancée Cyn Santana are in the middle of an intense legal battle regarding the custody of their 2-year-old son Lexington, which has made all kinds of relationship issues come to light, including an accusation from Cyn during a leaked phone convo that Joe was abusive to her, and in one particular incident, he chased her and dragged her around their home.

Cyn also said that Joe kicked her and their son out of his house and didn’t send them any money to support themselves.

Not long after that bit of information leaked, more info. was released from Cyn’s alleged court docs explaining Joe’s problems with substance abuse and outlining some of his questionable behavior, including him kissing their son on the lips and more.

In one particularly disturbing section of the docs, Cyn talks about Joe’s bizarre relationship with his dog.

“Defendant has a male dog whom he loves and showers with attention,” Cyn allegedly writes in the legal paperwork. “While most of Defendant’s interactions with the dog are appropriate, I have observed on several occasions one particularly bizarre behavior by Defendant.

“Without putting too fine a point on it, suffice to say that Defendant has not only expressed concern for the dog’s lack of a sexual partner, but has personally assumed responsibility for relieving any pent-up canine sexual tension.

“Defendant, for reasons I cannot fathom, has personally masturbated the dog. Defendant repeatedly states that he sees this function as his responsibility since there are no ‘bitches’ around to provide a sexual outlet for the dog.”

Now, before you go around screaming “Fake News!” let’s introduce you to this recently resurfaced video in which Joe admits to “playing” with dogs’ privates to make them feel good.

In the video, which is an excerpt from one of Joe’s podcast episodes, Joe is playing with his co-host Rory’s dog when he says: “Why do I always wanna make the dog feel good by playing with their f**king privates?”

After Rory laughs and tells him to “stop raping my dog,” Joe tries to shame Rory as a pet owner, saying: “See that’s how I know he’s not a real animal lover. Anybody with a pet, you’ve done a little something down there to make your dog feel good.”

Needless to say, Twitter has been clowning and dragging JB for the past 24 hours or so over this new revelation.

Let me move my bang… JOE Budden was doing WHAT WITH HIS DOG?? pic.twitter.com/qFr7DSPcVk

White folks about to get Joe Budden out of here once they hear what he did to the dog ? they said fuck him abusing women, we worried about the dogs!

Hello white people! Did you hear what Joe Budden did to his dog???

You mean to tell me JOE BUDDEN WAS BEATING OFF HIS DOG?!!!! and ODELL BECKHAM LIKES TO BE SHITTED ON!!!!!!! WTF IS GOING ON pic.twitter.com/fFeKRGtriC

Joe Budden’s dog when he comes home from a long day of podding pic.twitter.com/iLah9sE03K

Joe Budden was jacking his dogs off!????? That's not even surprising. That's some lightskin bald nigga with a beard type of shit.

Joe Budden when he sees his dog licking his own balls pic.twitter.com/OrIwFi1mRL

Joe Budden really said, “Anybody with a pet, come on, you did a little something down there to make your dog feel good.” That is a filthy, sick man. pic.twitter.com/KC9RhSBw40

Joe Budden ass been beating the shit out of women on thee regular but it’s the dog that’s gone get him the fuck up out of here pic.twitter.com/B3JBrVPLi1

why the fuck is joe budden getting exposed for jacking off his DOG?!

Joe Budden does WHAT to his dogs???????? pic.twitter.com/oo2ibeuW1q

The fact that there are so many tweets of Joe Budden talking about going home to “kiss his dogs” ???? pic.twitter.com/xD3rtDuChP

Joe Budden's dog when he hears the door open pic.twitter.com/S15018MKTH

Rory when Joe Budden ask if he can babysit his dog pic.twitter.com/cOAFLzNHkJ

Joe Budden when he goes to a dog park pic.twitter.com/N1r9jENiiE

AY THIS NIGGA JOE BUDDEN BE JACKING OFF HIS DOG pic.twitter.com/lZTFE1MlYU

And that’s just the tip of the iceberg. We could honestly go on forever (there are way more tweets!) but we’re sure you get the point now.