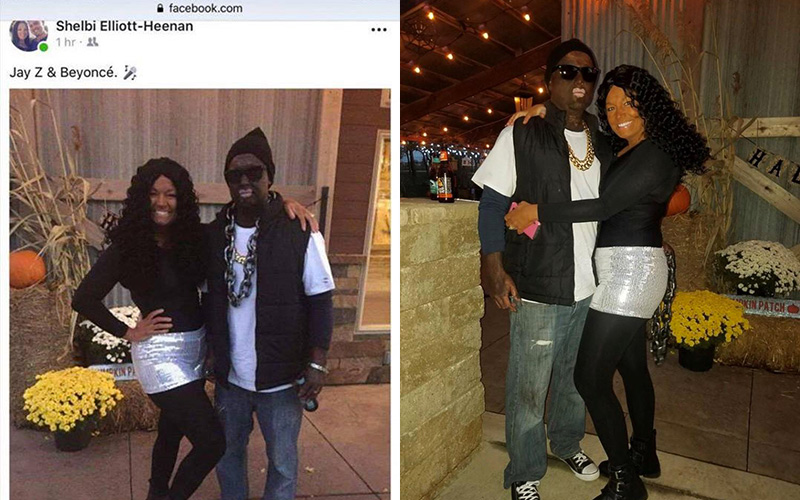 A nurse in Kansas, Missouri found out the hard way that blackface is NOT okay.

Shelbi Elliott-Heenan—a registered nurse at St. Luke’s Hospital in Lee’s Summit, Missouri—was fired from her job after photos of her dressed in blackface for what she called a Beyoncé costume went viral on social media. The photos were initially shared by Elliott-Heenan herself on Facebook.

The costume showed Elliott-Heenan covered head to toe in brown makeup along with her husband Jasmond Heenan, who appeared to be in more minstrel-like blackface. Heenan’s husband reportedly has a job with Costco. Anne Branigin of The Root put it best:

In whose alabaster-ass, Megyn Kelly-fied, Jesus-is-a-white-man world is this Beyoncé Has this woman actually ever seen Beyoncé? Any version of Beyoncé? Because whatever this hot mess of shoe polish, low-grade acrylic, and black Uggs with a dash of sequins is, it’s most decidedly not a Beyoncé. It’s just Becky with the blackface.

The whole thing was just awful and shouldn’t have been done, blackface or not. I mean, honestly, it’s hard to even be offended because, MY GOD, those were just AWFUL costumes. A woman reached out to St. Luke’s hospital Monday (Oct. 29) to let them know that one of their employees was out here wearing blackface and posting it on social media, and Shelbi Heenan was fired by lunchtime, KCTV reports.

In a statement obtained by KCTV, St. Luke’s wrote: “On Monday afternoon, Saint Luke’s Health System became aware of a Saint Luke’s East Hospital employee who posted photos on personal social media accounts of her and another individual dressed in blackface for what appears to be a Halloween event. This information was shared with appropriate health system personnel and an investigation was initiated immediately.”

The statement continued: “While it is against Saint Luke’s policy to comment on specific personnel matters, we can confirm that this individual is no longer a Saint Luke’s employee. Saint Luke’s is deeply committed to our culture of diversity and inclusion. It is fundamental to who we are as an organization and we vigorously protect it on behalf of all our patients and employees and expect those who represent us to do the same.”

Heenan’s well-deserved firing coincidentally (or not) comes amid reports of Megyn Kelly losing her job after making ignorant comments defending the use of blackface in Halloween costumes. And just last week, we reported on a first-grade Idaho teacher being “investigated” for wearing blackface to a Halloween party.

What the hell is it going to take for these white people to realize that wearing blackface isn’t OKAY?

Dr. Makini King with the University of Missouri-Kansas City’s Diversity and Inclusion Division says those particular kinds of white people need to simply be taught the history of blackface, because the issue may not be racism, just pure ignorance. Basically, if they knew better, they would (hopefully) do better.

“We need to do better at teaching history and we also need to be more integrated,” King said. We need to encourage relationships with people who are not like us and that’s a very deliberate thing, It has to be done. It doesn’t just happen because you know you’re a good person … people have to deliberately form relationships with other people so that they have better information about other people’s cultures what’s appropriate and what’s not and then also they get to humanize other people.”

King said simply firing people isn’t always the best solution, but instead using the instances as an opportunity to start a dialogue and get educated.

“We have to be able to make the repairs in order to be progressive in creating justice. It can’t just be punished and then the conversation is over,” she said.