GOSSIPONTHIS.COM Celebs Rich The Kid Hospitalized After Getting Robbed at Gunpoint & Pistol-Whipped at... 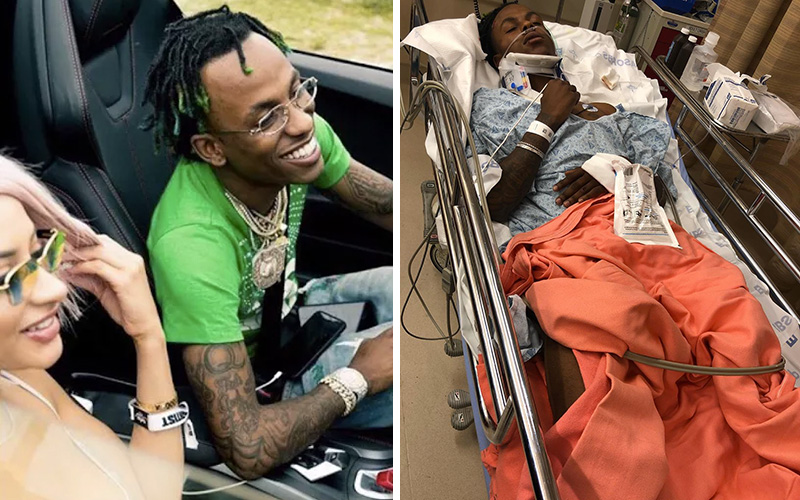 Now we know what landed Rich The Kid in the hospital.

According to TMZ, the “Plug Walk” rapper was attacked and robbed at gunpoint in Los Angeles last night. “The beatdown was so severe, it landed him in the hospital,” TMZ reports.

RTK was chilling at his girlfriend Tori Brixx’s house Thursday night (Jun. 14) when two men wearing masks busted in demanding cash and jewelry. Sources say Rich tried to fight them off, but three more men came into the home with guns. Rich was reportedly pistol-whipped during the altercation.

TMZ’s sources said as Rich was getting beat up, the armed robbers got away with a “significant amount of cash and jewelry.”

RTK and Tori Brixx were both taken to a hospital for treatment, and Rich posted a photo of him in a hospital bed on Instagram this morning, prompting many to wonder what the hell was going on with him. In the pic, he has a neck brace on, is hooked up to an IV and is being given oxygen through the nose.

Cops were called after the attack, but it isn’t known whether or not a report was taken. Rich’s team, however, already seems to believe the robbery was an inside job.

RTK hasn’t been having the best month so far. After Lil Uzi Vert ran up on him in Philly and caused him to run to a nearby Starbucks and hide behind the counter, leaving many to question the status of his street cred, just yesterday he was attacked by a taxi driver who threw objects at his car.

While the past 30 or so days haven’t been good to Rich, 2018 has definitely been his year (besides that whole wife filing for divorce thing).

News of the rapper being the victim of armed robbery and his subsequent hospitalization comes a few hours after he celebrated earning eight platinum plaques this year on his Instagram story. “Eight plaques in 2018… EIGHT!” he said. “Y’all n**gas need to catch up! Eight plaques, I’m winning!”

The badge of honor accounts for some of his biggest hits to date, including “New Freezer” and “Plug Walk,” from his debut studio album The World Is Yours. He also posted a video to IG his story showing him in the studio working on new music, captioning the clip “Back 2 work!”