GOSSIPONTHIS.COM Hip Hop The Internet Is Having a Field Day With This Lil Uzi Vert... 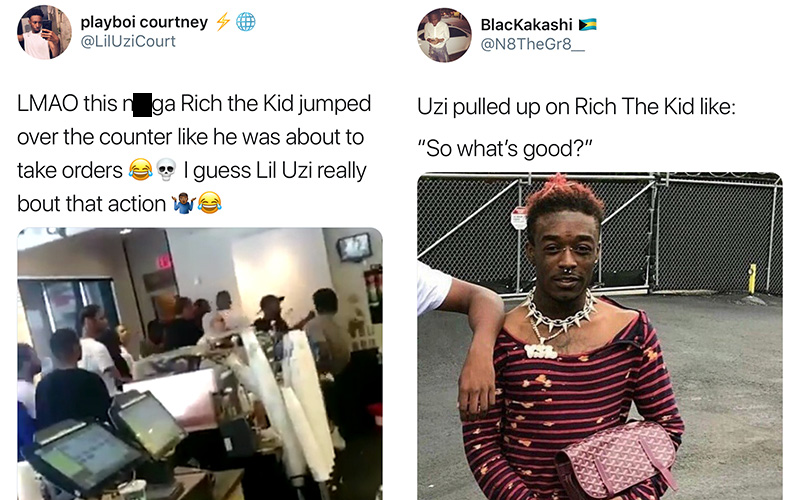 It looks like Rich The Kid and Lil Uzi Vert’s rap beef has spilled over into “the streets,” and the internet is doing what it does best: turning the situation into countless memes.

Uzi and Rich have been going at it ever since Uzi rejected Rich’s label deal, opting instead to go with DJ Drama. Back in February, the two rappers had a heated back and forth on social media when Uzi called Rich a “1,000 crab.” And a month later, Rich released an Uzi diss track titled “Dead Friends,” an obvious reference to Uzi’s “XO Tour Lif3” lyric “Push me to the edge, all my friends are dead.” Rich’s Uzi diss track also included the line, “Yo money getting shorter,” referencing Uzi’s “Money Longer” hit.

Hilarious video footage that has gone viral on social media shows Lil Uzi Vert confronting Rich The Kid in Philadelphia over the weekend. Both rappers were in town Saturday (Jun. 2) for the annual Roots Picnic festival.

In the fan-shot footage, Uzi can be seen verbally confronting Rich on a street corner. Apparently, Uzi was riding in a car when he saw Rich standing on the street corner and decided to hop out to confront him.

Another video shows Rich then running down the street into a nearby Starbucks, where a physical confrontation ensued. While inside the Starbucks, Uzi punches Rich, causing him to jump behind the counter in an effort to evade the punches.

Rich later took to social media where he posted a video of his own in an effort to prove to the world that he was unscathed in the confrontation.

After all was said and done, Uzi was spotted in the club later that night dancing to Rich the Kid’s “New Freezer,” seemingly gloating about his victory.

Rightfully, Rich the Kid was given the Donkey of the Day award by Charlamagne tha God of the Breakfast Club:

And from the confrontation on the street to the altercation inside the Starbucks, the whole Lil Uzi vs. Rich the Kid situation has inspired a number of hilarious memes and Twitter reactions.

Check out some of the best/funniest ones below:

Lil uzi wear crop tops and still pulled up and knocked rich the kid upside his head. An elusive and feisty king

Folks surprised Uzi pulled on Rich the Kid like he ain’t do this to the guy who kept leaking his music ? pic.twitter.com/ITuhL6O4b2

Pusha T revealed that Drake had a hidden child

Uzi just ran up on Rich the Kid in Philly

Rich the kid finna be employee of the month ?? pic.twitter.com/5oQqKd7LVP

Rich the kid running away from Lil Uzi Vert pic.twitter.com/71RIbZu8M5

Lil Uzi will pull up on Rich The Kid and then go back to sipping Rosé wearing a Chanel purse with Young Thug. A master of balancing feminine and masculine energy.