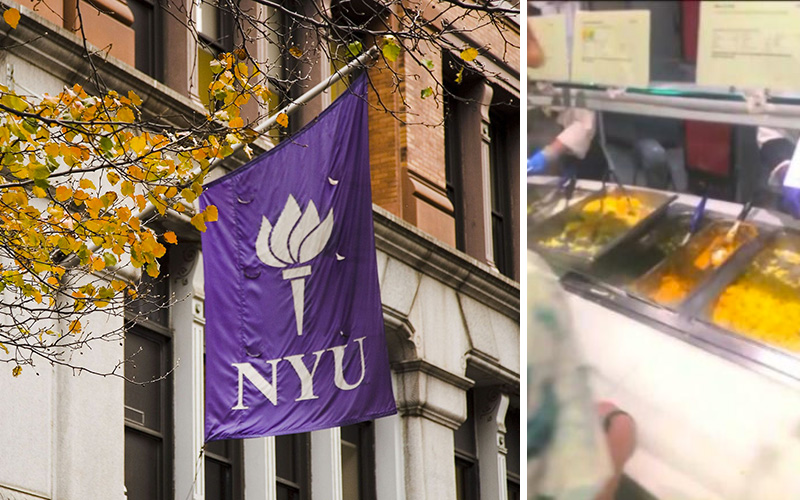 New York University is in serious hot water after serving a “special” meal “dedicated” to Black History Month that has made headlines and left several students offended.

In “honor” of Black History Month, the school served a menu in the dining hall that consisted of: BBQ ribs, collard greens, yams, cornbread, and macaroni and cheese along with Kool-Aid and Watermelon flavored drinks.

Nia Harris, a sophomore in N.Y.U.’s College of Arts & Science, took to Facebook in response to the incident and spoke on how upset and disappointed in the University she was for allowing it to take place.

She wrote in a lengthy message on the social media site:

This is what it’s like to be a black student at New York University. You go to a dining hall during February and you see “Black History Month Meal” plastered outside the entrance. You walk inside the dining hall only to find ribs, collard greens, and mac and cheese. You note that this is stereotypical, but you decide not to make a big deal. Then you see the beverages, Red Koolaid and watermelon water. You take a breath. You ask to speak with the person over this specific dining hall menu. After being bounced around from person to person you finally get a chance to meet with someone. Today this happened. Today I was lied to, placated, and ignored. In 2018 I literally had to explain why displaying watermelon and koolaid in celebration of Black History Month was not only racially insensitive but just ignorant. I’ve wanted to go to NYU since I was 7th grade, and it breaks my heart that at this allegedly “diverse” and “global” institution, black students are faced with issues like this one. Attached below is the email I sent to dining services today as well as the Deans of the University. However, I don’t want it to stop there. Please share, repost, comment, or whatever. TALK ABOUT THESE ISSUES. These institutions want black students for diversity statistics, but cannot handle when students speak out. It’s time for action.

NYU’s President Andrew Hamilton issued a half-assed apology a day later after students voiced their opinions over how racially-insensitive it was for the dining hall to put such a racist, stereotypical menu together. He also put all the blame on Aramark, the company that provides the meals in the University’s dining hall.

“NYU’s dining administrators will insist that Aramark put in place a mechanism to avoid a repeat of yesterday’s episode, such as consulting the existing student advisory body and campus cultural groups about the menu for special events,” Mr. Hamilton said in a statement.

Aramark also responded, saying that they fired the two employees (who were both white) that came up with the racist Black History Month meal.

“We have zero tolerance for any employee who does not adhere to our values or contradicts our longstanding commitment to diversity and inclusion,” Aramark said in a statement Wednesday. “Employees at NYU who acted independently and did not follow our approved plan for the celebration of Black History Month have been terminated and are no longer with the company. We are extremely disappointed by this regrettable situation and apologize to the entire NYU community and communities everywhere for their insensitive and offensive actions.”

To make matter’s even worse, the dining hall’s head cook initially told students that the menu was made up by employees who were black, only for University officials to later confirm that the Kool-Aid and Watermelon water was placed on the menu by white employees.

Students at the school also called out the University’s president over his apology statement, which they felt was unclear.

“I want the people who were fired. I want it to be clarified who they were, what their positions were, that they were not people of color because that’s a big misconception. I want him to state that on this campus, he values Black students,” Nia Harris said at an open panel held by NYU’s Center for Multicultural and Educational Programming in response to the controversial issue.

Kayla Eubanks, another student at the University also voiced her concerns in regards to Hamilton’s apology.

“When I read the statement, it seemed pretty vague,” Eubanks said. “I want him to say that we at NYU acknowledge that this was wrong, we do not agree with it and we’re literally taking the side with the students. I want him to directly say that.”

This is just another example of how America feels about Black people. I wonder what old wrinkled bird face Trump has to say about all of this. He probably wouldn’t even see what the big deal is, which is a whole ‘nother problem in and of itself.