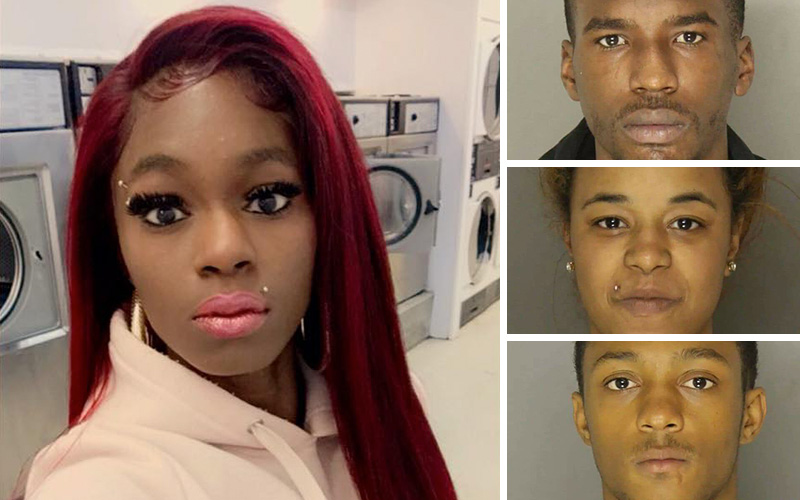 27-year-old mother of two Keiauna Lynnette Davis lost her life last week after she was robbed and shot to death in Wilkinsburg, Pennsylvania (near Pittsburgh) over tax money she had just received.

Here are some things to know about Keiauna Davis’ murder:

1Keiauna Davis was allegedly set up by one of her co-workers.

According to the Pittsburgh Post-Gazette, Keiauna Davis’ tax refund of $3,000 was deposited into her bank account early on Thursday (Feb. 22).

Later in the day, her grandmother brought the money to her job at Dollar General while she was on her lunch break. One of Davis’ co-workers, 21-year-old Laya Whitley, found out about the money she had just received and conspired with two men to rob Davis.

Court documents showed that Whitley texted a 21-year-old man named Dane Taylor and told him about the money Davis had on her person.

In the text messages, Whitley allegedly texted Taylor, “This girl at my job brought 7 bands to work ain’t that some sh*t.”

Taylor texted back, “It’s a go delete all dez text,” hours before the robbery occurred.

2Davis was walking home when she was shot to death.

The crime scene after Keiauna Davis was murdered.

Dane Taylor and another man named Kaijin Scott, 23, appeared at Keiauna’s job and waited in the Dollar General parking lot for her shift to end.

After Davis clocked out, the two men followed her in a vehicle as she walked home around 2:50 p.m. The men followed Davis for a short time before Taylor got out of the car wearing a mask and pulled a gun out on Davis. A fight ensued between Davis and Taylor, which led to Taylor shooting Davis in in the hip.

According to court documents, Taylor grabbed Davis’ purse after shooting her and took an envelope full of cash out of her purse. Taylor then threw the purse out the car window and, along with Scott, fled the scene.

Davis was taken to UPMC Presbyterian after the shooting, where she was pronounced dead. Her mother, Sheila Detwiler, was at work when she received several phone calls and messages from family and friends informing her it was an emergency.

“It wasn’t real. I couldn’t reconcile it in my mind. I couldn’t believe it. I still can,” Ms. Detwiler told the Post-Gazette

3Davis had two daughters and had recently planned on moving to North Carolina.

According to Davis’ mother, Davis had planned on using the tax money to move her and her two daughters, 6-year-old Azaylah and 2-year-old Aliviyah, to North Carolina, so that they could be closer to Ms. Detwiler.

Before the incident occurred, Davis’ mother says she was coming to Pittsburgh on Saturday to help her daughter move.

“I can’t believe someone places so little value on someone else’s life for $3,000,” Ms. Detwiler mother told the Post-Gazette.

Detwiler said she had found a 5 bedroom house for her, her daughter and granddaughters in the Charlotte area and Keiauna agreed to make the move.

4Keiauna’s mother believes her daughter put up a fight before her life was taken.

“She was a strong young woman. She was tough, she was feisty. She fought for that money, I know she did,” Ms. Detwiler told the news.

Ms. Detwiler also said she doesn’t believe that the people who robbed her daughter intended to kill her, but she doesn’t understand why someone would shoot her daughter, who she described as “petite.”

“They will answer for this,” Ms. Detwiler said. “I want them to know that their lives are over.”

Ms. Detwiler says she now is focused on raising her two granddaughters, who she has to find the words to explain what happened to their mother.

Laya Whitley (Davis’ co-worker), Dane Taylor, and Kaijin Scott have all been charged with criminal homicide, robbery and conspiracy.

Taylor has also been charged with carrying a firearm without a license.

The three were placed in Allegheny County Jail and are scheduled for a preliminary hearing on March 9th.

6A fundraiser was created on Facebook to help pay for Keiauna Davis funeral expenses.

“On February 22, 2018, 27 year old Keiauna Davis was violently taken from us by a senseless act of pure greed. Keiauna worked two jobs to support her beautiful baby girls, as many young single mothers are having to do. The monsters that took her life gave no thought to the future of her babies, only their own selfish desires. They robbed her of her hard earned money, then took her life. As you can imagine, the family was hit hard by her sudden death and were left totally unprepared for making funeral arrangements. We are asking you to search your heart for the willingness to help this family in any way you can as they prepare to lay their loved one to rest. May God bless you and keep you. Thank you in advance.”

So far, within three days, more than $11,000 has been raised to help with funeral expenses, already exceeding the original goal of $10,000.

7Davis’ mother says her daughter was “special” and the two had recently celebrated together at Club One in Charlotte.

Ms. Detwiler said her daughter was a huge fan of the TV show “Real Housewives of Atlanta” and for her birthday which was just weeks before the shooting, she took her daughter to Club One, which is owned by RHOA star Cynthia Bailey’s ex-husband Peter Thomas.

“She had an awesome time,” Ms. Detwiler said. “She was happy and dancing.”