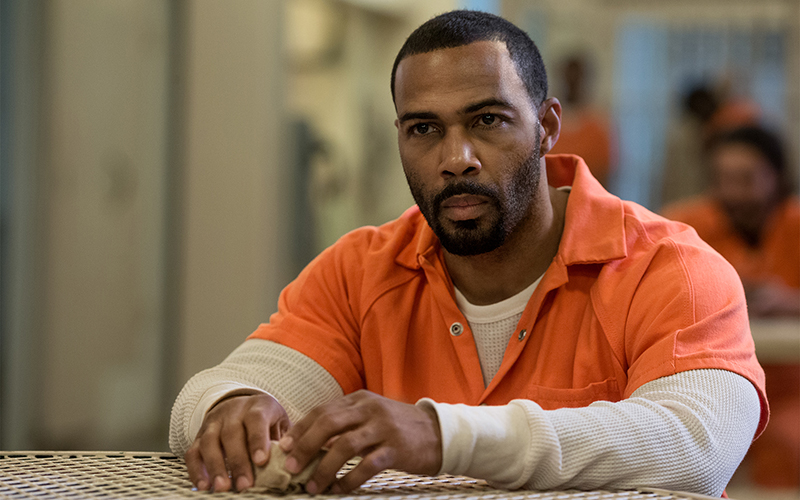 We’re only 2 episodes in and sh*t is already getting realer than real for Ghost.

The prosecution team got the judge to approve the death penalty for James St. Patrick, so that means that he is now on death row. Ghost has come close to death many times before, but this is just on another level of crazy.

Meanwhile, Tommy is having a little trouble keeping everything together, Tasha’s trying to be strong for the kids and Tariq is still being a little f**kboy who is putting too much trust into Kanan.

Find out what else happened on “Power” Season 4 Episode 2, appropriately titled “Things Are Going To Get Worse,” below:

Ghost is pissing blood. And no, you cannot have his biscuits. As expected, Ghost is really having a hard time living as James St. Patrick behind bars. The man is pissing blood, y’all. Remember how at the end of the last episode, Charlie Murphy b*tch azz (God rest his soul) and another cop beat the crap out of Ghost? Well, apparently they beat him so bad that he’s pissing blood. A LOT of blood. I’m no doctor, but I can only imagine that blood being present in his urine is the result of repeatedly being kicked in the groin, which, I’m sure they did as they were beating him senseless. “F**k the police” — NWA.

Proctor asks him if he fought back when the police were beating him up, and Ghost says he didn’t. “Good, because everyone in here thinks you’re James St. Patrick. No matter how much people mess with you, you’re gonna have to suppress Ghost.” Our boy is really struggling with keeping a tight lid on his Ghost identity, but people really keep testing his gangsta. Aside from Marshal Williams (Charlie Murphy) making him his prime target, other inmates have their eyes on him as well. Like this one scary-looking dude with scars all over his face who literally took Ghost’s biscuit out of his hand, and also TRIED to TAKE his biscuits (if you know what I mean). When the guy gets a little too handsy and tried to feel him up — “You lookin’ real pretty with them baby seal eyes,” he says (I couldn’t help but laugh at that line) — Ghost takes his hand and breaks it. Damn! So much for “suppressing Ghost.”

Neither Ghost nor Angela can take the stand, or else EVERYBODY gets in trouble. To prepare them for questions they could face if they testified in court, Proctor and Mark cross examine Angela and Ghost. The scenes weave back and forth between Proctor grilling Ghost and Mak interrogating Angela (after walking in on them talking sh*t about her, lol).

Ghost and the prosecution have what they believe is a bright idea for winning their respective cases: telling the truth about Ghost and Angela’s relationship. But this isn’t good for neither the defense nor the prosecution. Emphasizing Ghost and Angela’s affair, and the subsequent love triangle between them and Greg Knox would compromise the entire DA office because, under oath, they would have to testify that they ALL knew what was going on and did nothing to stop it, which incriminates everyone. And if they lie, that would be perjury and they could face charges for that.

The same thing goes for Ghost, but his consequences are even worse. His knowledge of Knox and his affair could be used as a motive to kill out of jealousy. Also, Ghost has actually killed people in the past, so he doesn’t want the DA digging that deep into his life and uncovering all his dark secrets. So he and Angela both agree that taking the stand probably isn’t the best idea, because duh. Instead, the prosecution is focusing on the narrative of James St. Patrick and Ghost (who they believe is Tommy) moving drugs and killing Greg because he was on to them. Meanwhile, Proctor tells Ghost to just keep being the good guy and make some phone calls. “Be James St. Patrick … it’s all about perception.”

Later, while talking to the press, Proctor throws a hail mary and plays the race card, and goes all “Black Lives Matter,” saying that the only reason Ghost was charged with murder is because of the color of his skin. Mak is PISSED, and tries to get the judge to sign off on a gag order so that Proctor can’t speak to the media, but the judge ain’t having it because Mak is a media whore himself and he and Proctor are known rivals. So the defense will have to come up with something else to weaken Proctor’s case.