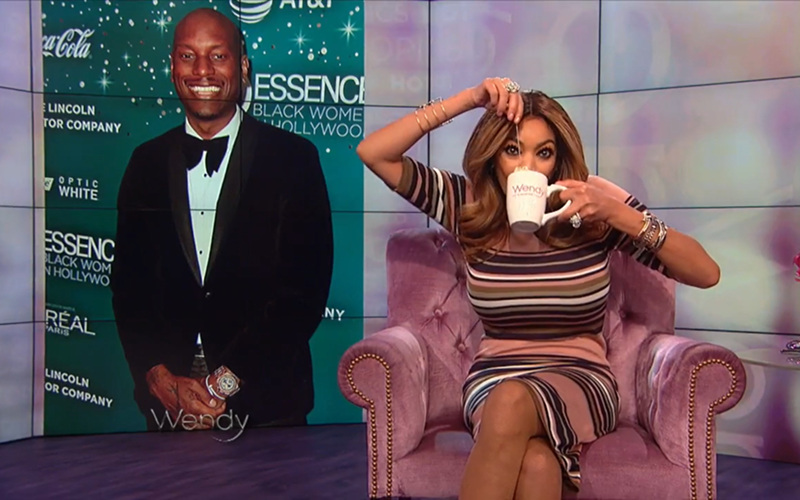 Wendy Williams is back from her 2-week vacation and she wasted no time getting back to her old tricks. The talk show host expressed faux-feminism views while discussing Tyrese Gibson’s recent misogynistic comments, but at the expense of the LGBT community.

During Thursday’s live show (Apr. 13), Tyrese’s recent opinions about women’s sexual behavior was a hot topic. In a BET interview earlier this week, The Fate of the Furious actor criticized “sluts, skeezers, hos and tramps” and advised single women to wait until God sends them the right man. Otherwise, they will have a “lot of miles down there.”

The actor was, of course, dragged on social media for the misogynistic comments and for disregarding men who are also sexually “active in these streets” like he described “promiscuous” women.

With her faux-feminism ways, Williams added her two cents. She slammed Tyrese for his comments and defended women who like to have fun. (Although, she also advised them to do it in secret). She also took a jab at Tyrese by insinuating he does not criticize men because he is secretly gay.

*She then proceeds to literally sip her tea*

HOT TOPICS: Tyrese had a few words to say about women and you know Wendy had something to say. Watch Now: https://t.co/hpHdLaxGXU pic.twitter.com/0oz9qTZWWc

The clear and obvious insinuation is that Tyrese is gay and she uses it as an insult. The statement comment is incredibly homophobic and, in my opinion, negates her overall argument. You can’t criticize someone else’s degrading comments in one breath, only to make one yourself in the next. And even if Tyrese was secretly gay, it’s also not OK to out someone on national TV.

Once her audience caught the shade, Williams tried to play it off by adding “I like women!” and sarcastically asking her audience, “What are you saying?”

The talk show host’s comments come just a few weeks after the drag community expressed outrage after she was named the host of the weekly RuPaul’s Drag Race viewing party on VH1. Though she claims to be an LGBT ally, many drag performers noted that Williams has made several problematic statements against the LGBT community throughout her broadcast career.

I’m sure the LGBT community will not care for her latest quip either.

Tyrese and Williams were both out-of-line for their respective statements. And for what it’s worth, Tyrese married a woman earlier this year in a secret Valentine’s Day ceremony.