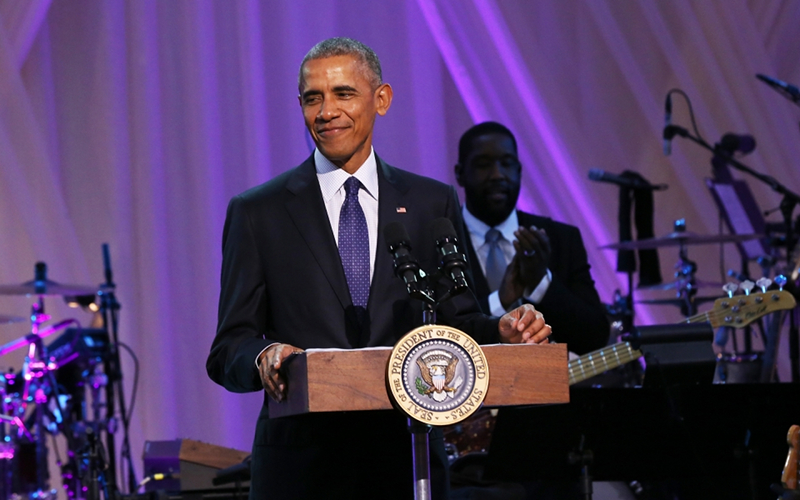 In just a few months, we will have to say goodbye to the coolest President of the United States ever. Last night (Nov. 15), BET aired the TV special Love & Happiness: An Obama Celebration. The program celebrated President Barack Obama’s two-term presidency and also sparked the hashtag, #ThankYouObama.

The special was filmed last month on the White House lawn and included performances by Janelle Monae, Common, and Usher. Celebrities such as Jesse Williams and Samuel L. Jackson also spoke and the President and First Lady Michelle Obama were honored from the audience.

BET encouraged audience participation by using #ThankYouObama. The hashtag quickly became a trending topic and took on a life of its own as many expressed their gratitude for the First Family.

#ThankYouObama for fighting for equality for all regardless of sexuality orientation or gender identity. You will be greatly missed. #LGBT

Thank you God for allowing me to witness a President & First Lady that look like me. It reassures that anything is possible! #ThankYouObama

#ThankYouObama for being a great role model to all the children growing up in the United States! ?? pic.twitter.com/vnTAeLxCrW

#ThankYouObama even though I may not have agreed with more than half of your decisions, I still respect your dedication to this country. ??

We literally just had the coolest president EVER in office for 8 years! We will miss your President Obama #ThankYouObama ????

You made me feel safe and hopeful when you saved us from economic collapse-You also made my #studentloans finally affordable. #ThankYouObama

You & @FLOTUS have raised such beautiful, poised young ladies and made the women of this country feel valuable and cherished. #ThankYouObama

#ThankYouObama for bringing charisma and a kind heart back to the white house. Your words and outlook of hope will live on forever.

they will ALWAYS be my first family. #ThankYouObama

#ThankYouObama for being a president that didn't embarrass the USA. You make me proud to be an American. You and your family will be missed

? @MichelleObama is in the audience just flawlessly enjoying herself ?? #ThankYouObama pic.twitter.com/UjdG7g5aPA

#ThankYouObama For being a good President, making an effort to restore the economy and just being a respectful person in general.

Thank you God for allowing me to witness a President & First Lady that look like me. It reassures that anything is possible! #ThankYouObama

I hope to live long enough for this country to realize how great this President was.
And what we just threw away.#ThankYouObama

#ThankYouObama for leading the country with Grace and Dignity. Something I'm sure we won't see in the next 4 years.

"There are children who have only known a black president" powerful! #ThankYouObama

#ThankYouObama For the last 8 years when they went low, you went high. You will be missed tremendously.

Intelligent.
Dignified.
Poised.
Saved economy.
Got Bin Laden.
Cool as the other side of the pillow.
Miss u already.#ThankYouObama pic.twitter.com/bRCi1Gryke

#ThankYouObama My Mom would collapse in pain and we had no idea why becuz she had no insurance. #Obamacare changed our lives and her life

#thankyouObama classiest first family ever. You will be sorely missed. pic.twitter.com/i73ugdHOjE

It’s been an amazing eight years that seemed to come and go in a blink of an eye. It will certainly be hard to say goodbye to President Obama. He overcame and achieved great things during his presidency and I’m not quite sure if there will be another President as cool in our lifetime. #ThankYouObama, your kindness and leadership will be missed!