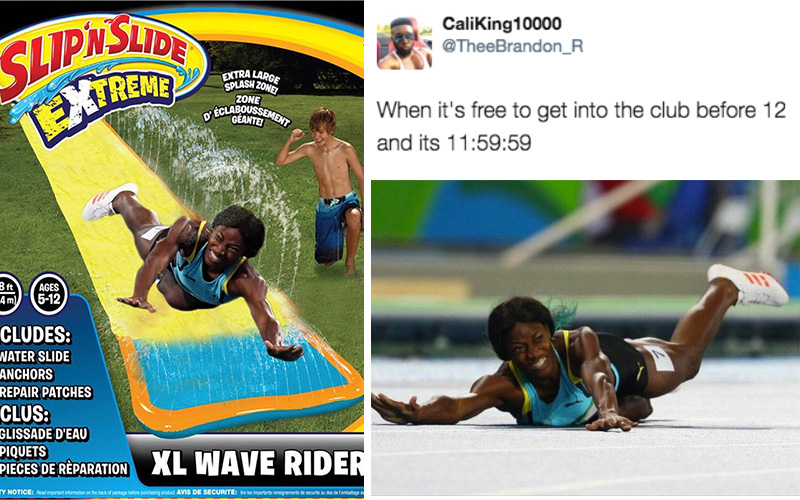 Athletes train their entire lives to make it to the Olympics and then only dream of winning a gold medal. To ensure her dream came true, Bahamian sprinter Shaunae Miller, literally threw herself over the finish line.

American runner Allyson Felix was the favorite to win the 400-meter dash, but Miller crushed her hopes with a controversial tactic. Running neck-and-neck, Miller opted for a last-minute dive across the finish line. The controversial, yet totally legal, move earned her a gold medal, while Felix had to settle for silver.

Social media quickly jumped on the chance to turn the dramatic moment into clever memes. When your mother said be home before the streetlights come on and you just make it in the door #ShaunaeMiller pic.twitter.com/ht5nTUuAKy

When your phone is at 1 % and you finally found an outlet ? #Rio2016 #ShaunaeMiller pic.twitter.com/xihjEFfVrj

"You mean I could've DOVE????" pic.twitter.com/lUJPDjfsjn

When you submit a paper on Turnitin at 11:59 pm pic.twitter.com/bz3uhbIMPn

Me in the Olympics pic.twitter.com/6u1wDPTinB

Felix, however, was not laughing. It took her nearly an hour after her loss to talk to reporters. “I’m a competitor. I went for it. At the moment,” she said at the time.

“It’s just painful. I feel emotionally and physically drained at this point…Just disappointment, you know. I don’t think I’ve quite had a year this tough. I just really wanted it.”

She was in better spirits the next morning, as her silver medal now makes her the most decorated American female track & field athlete.

Meanwhile, Miller is celebrating her win and even admits she’s never used the dive method prior to the race.

“I’ve never done it before. I have some cuts and bruises, a few burns… it hurts,” Miller said.

Hey, desperate times call for desperate measures. Congratulations on your gold medal, Miller. Better yet, thanks for the memes!