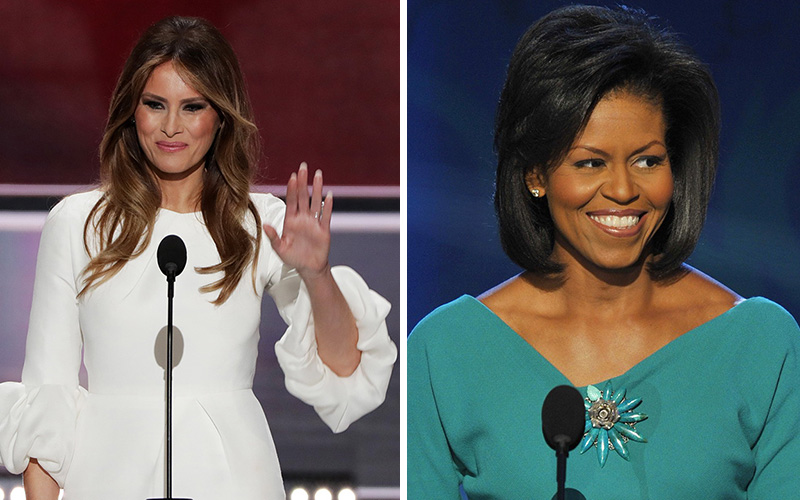 Melania Trump, Donald’s third wife and former model, has largely been kept out of the spotlight during his presidential run. In an interview with ABC News, Melania said the choice to not be there was 100% hers, and that they “have a 9-year-old son together, Barron, and I’m raising him.”

But last night, the potential future first lady made her big splash with a speech at the Republican National Convention, and to say it could have gone better is an understatement.

Former Gossip On This contributor Jarrett Hill was the first to notice that a certain passage in Melania’s speech sounded awfully familiar.

After a little snooping, he discovered that she had, almost word for word, copied a speech given by Michelle Obama at the 2008 Democratic National Convention.

Michelle: “Barack and I were raised with so many of the same values…”
Melania: “My parents impressed on me the values…”

Damn, Melania. One of the first things you learn in school is never to plagiarize, and if you do, at least cite your sources. By that standard, Melania should’ve given big ups to the current first lady following her speech last night.

Now who should take responsibility for the gaffe is up for debate. Melania said she wrote the speech herself with “as little help as possible,” but other stories show she had a team of writers help in her introduction to the world.

A response by the Trump campaign downplayed the fiasco by not really saying anything at all:

Success. Yeah, right. I guess we are all talking about it, so there’s something. But for a presidential candidate who campaigns on fighting foreigners taking our jobs and bringing back the great American manufacturing, it’s ironic to have his foreign wife ripping off an American made speech and claiming it as her own.

If it was anyone but Trump, it would likely pose a problem. A HUGE problem, actually. But it’s Trump, so chances are it was on purpose so that he could blame the Liberal media for fabricating another lie against him.

And in one last great twist to the great Melania awakening, it turns out she didn’t just copy Michelle Obama. She also took a line from the classic Rick Astley song.

“He will never give up. And most importantly, he will never, ever let you down.”