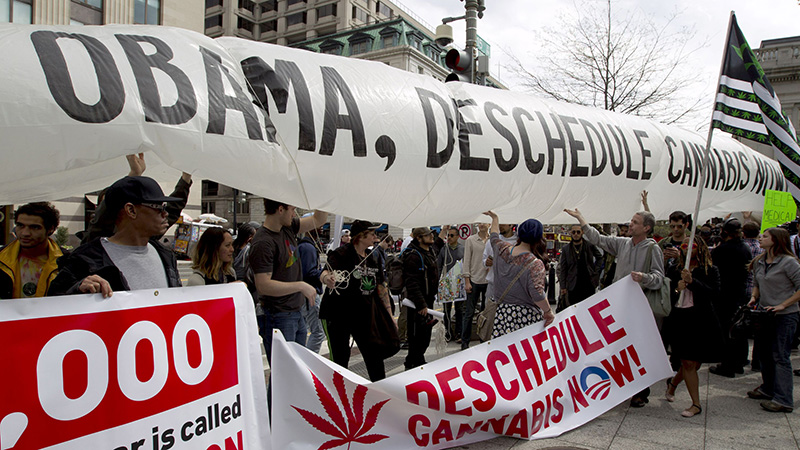 For years, marijuana, has been classified as a “Schedule 1” drug along with heavy drugs such as heroin, ecstasy and cocaine, but a new move from the DEA could change all of that.

The United States Drug Enforcement Administration sent a letter to legislators today saying that they plan to make a decision in the first half of 2016 on whether they will reclassify cannabis in a category outside of Schedule 1, which includes drugs that have “no medical use and a high potential for abuse,” as well as “potentially severe psychological or physical dependence.”

Currently, marijuana is considered more dangerous than prescription painkillers, which have been responsible for hundreds of thousands of deaths via overdose, yet there isn’t one single proven case of someone dying from overdosing while using marijuana.

Don’t get too excited though, because the DEA’s reclassification does not mean that weed will be “legal.” This does, however, make it easier for researchers to learn about the longterm effects of regular marijuana use and whether or not it can actually be used to help people. (Spoiler: It’s not harmful and it does help people.)

Currently, the government grants a monopoly on marijuana production for research purposes to one program at the University of Mississippi. “Because of this monopoly, research-grade drugs that meet researchers’ specifications often take years to acquire, if they are produced at all,” a Brookings Institution report argued last year.

According to the memo, in the years between 2010 and 2015, the government provided marijuana for research purposes to an average of nine researchers per year. Given the rapidly changing marijuana policy landscape, experts say that level of support is nowhere near enough to keep up with research demand.

“That number is totally insufficient to meet public health needs and to answer the number of [research] questions that pop up yearly,” the Brookings Institution’s John Hudak said in an interview.

Hudak said the small number of researchers working with marijuana in any given year is less a function of the government turning down applications, and more a function of an onerous, convoluted application process — one that requires approval from multiple government agencies and deters academics from even pursuing this type of research. “People just aren’t applying because of all the headaches involved,” he said. “It’s a huge disincentive for the academic community.”

In addition to the research benefits, the DEA downgrading cannabis from a Schedule drug could also mean eventual federal decriminalization of the substance.

The DEA teasing a decision to modify its classification of marijuana comes after increased requests from politicians asking them and other federal bodies to create a research strategy in response to the growing patient pool of medical marijuana users.

So far, at least 23 states (that’s almost half the country!) have legalized at least some form of marijuana, with Alaska, Colorado, Oregon, Washington and D.C. allowing recreational use.

But the head of the DEA is firm in his belief that medical marijuana has zero health benefits.

“What really bothers me is the notion that marijuana is also medicinal — because it’s not,” Chuck Rosenberg, a former federal prosecutor and the current acting head of the DEA, said back in November. “We can have an intellectually honest debate about whether we should legalize something that is bad and dangerous, but don’t call it medicine — that is a joke.”