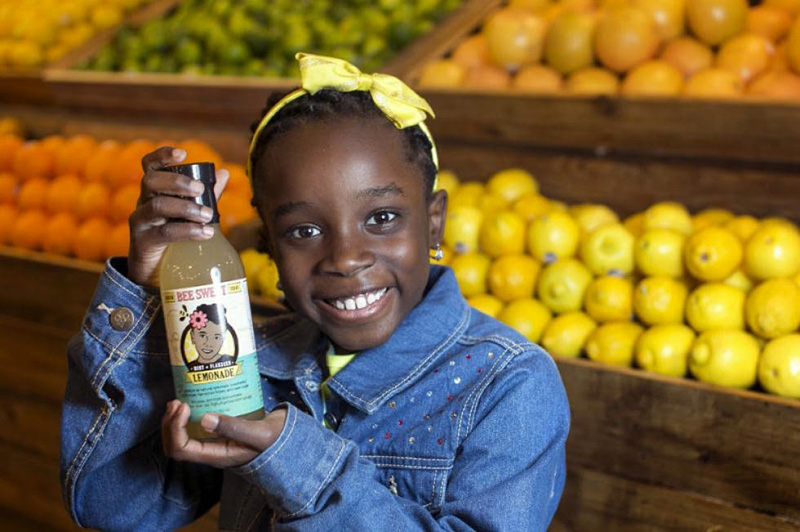 When it comes to selling lemonade, most kids just setup a lemonade stand outside and serve it by the glass. 11-year-old Mikaila Ulmer is not like most kids though. She’s selling her lemonade by the case to Whole Foods!

The sixth grader from Austin, Texas made an appearance on ABC’s hit TV show Shark Tank last year and scored a $60,000 investment from FUBU CEO Daymond John for her “Me & The Bees” lemonade, which was developed in part from her great-grandmother’s recipe from the 1940’s.

NBC News reports that Mikaila’s lemonade, which is sweetened with natural honey instead of sugar, will be sold in 55 Whole Food stores across four states, including Texas, Oklahoma, Arkansas, Louisiana and Florida.

The 11-year-old entrepreneur’s story of how she came up with the idea to sweeten her lemonade with honey from real bees is very interesting and touching.

“When I was four years old, I got stung by two bees in one week,” she said. “It was painful. I was terrified of bees.”

Mikaila said her mother, D’Andra, turned the scary experience into an insect research assignment where Mikaila learned that bees could possibly become extinct in the years to come.

“And then it clicked!” she said.

Mikaila decided to create a lemonade business and sweeten her lemonade with honey instead of sugar or artificial sweetener, which would be healthier, save the bees, and support beekeepers.

For Mikaila, her enterprise is an environmental and social mission. She donates a portion of the profits from the sale of her lemonade to local and international organizations that are trying to save the honeybees.

Honey bees pollinate more than $15 billion of crops each year, about one-third of American food groups, including cherries and apples.

“Last year, beekeepers lost 40 percent of all their hives,” Mikaila said. “Bees are dying.” She quoted Albert Einstein who said: “If the bee disappeared off the surface of the globe then man would only have four years of life left.”

Today, Mikaila leads workshops on how to save the honeybees, and she participates in social entrepreneurship panels.

“I think she is a pretty hard worker,” D’Andra Ulmer, Mikaila’s mother, told NBCBLK. “I’m impressed with how she gets her homework done during her travels. She has a gift for public speaking but what makes me very proud is that she is not only a smart entrepreneur but she’s a good person and she’s kind to people. That’s more important than business.”

Mikaila said when she first started her lemonade operation, her friends were skeptical. “At first, they didn’t believe me,” she said. “Now I am helping my friends start their own businesses.”

Regarding her appearance on Shark Tank, Mikaila said, “I was nervous and excited … Not everyone gets an opportunity to pitch their products in front of millions of people and make a deal so I was excited and grateful.”

Daymond John said he was happy that he picked Mikaila’s company to invest in. “Partnering with Mikaila made perfect sense. She’s a great kid with a head for business and branding.” In addition to her Shark Tank appearance, Mikaila also got the chance to meet President Barack Obama and First Lady Michelle Obama at the White House Kids’ State Dinner. “The President said ‘sorry to crash the party!’ It was very cool,” she said.

She also attended the annual White House Easter Egg Roll and in June, she has plans to travel to Cape Town, South Africa to talk to young girls about entrepreneurship, which she says she’s “very excited” about.

Mikaila said that she also plans to eventually create new lemonade flavors as her business expands. “I want to help save the bees, and use my great-grandmother Helen’s lemonade recipe.”