GOSSIPONTHIS.COM Pop Culture Study: How #BlackLivesMatter Blew Up on Twitter 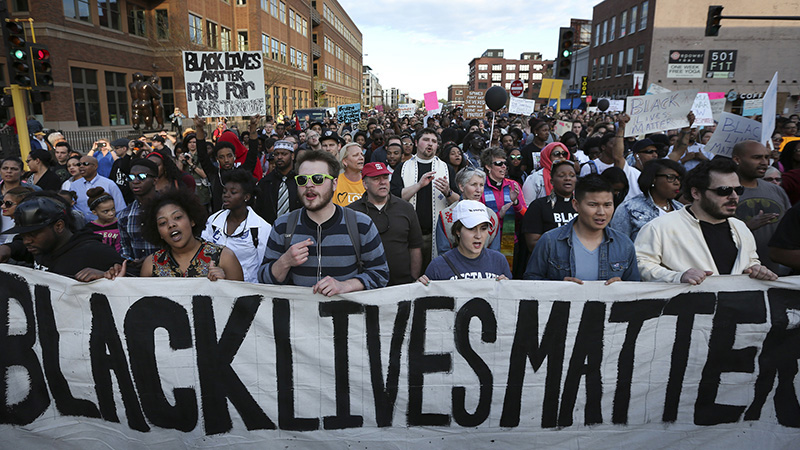 Black Lives Matter is now considered a major political force, but can you believe that it hasn’t even been two years since the protest movement began as a simple Twitter hashtag?

An interesting new study by a group of media scholars traces how #BlackLivesMatter exploded on Twitter between June 2014, right after the police killing of Eric Garner in New York City and May 2015, just after the protests over the killing of Freddie Gray at the hands of Baltimore police.

The researchers (Charlton McIlwain, Deen Freelon and Meredith Clark) reportedly spent a tremendous amount of time combing through millions of tweets and conducting dozens of interviews to come up with their theories on who led the conversations regarding the movement and how they were connected to each other.

Based on their research, they determined that there were six big “recurring communities” that regularly talked about police violence during the explosion of the #BlackLivesMatter movement:

From there, the researchers studied the roles played by each group and the evolution of the conversation over time.

This is what they discovered (via NPR):

The researchers stress that Black Lives Matter, the diffuse political organization, is distinct from #BlackLivesMatter, the Twitter hashtag, although many of the organizers and activists use the hashtag as well. (It’s also worth noting that Black Lives Matter is the most well-known organization, but its name is often conflated with other groups with similar aims, like BYP100 and the Dream Defenders.)

The hashtag #BlackLivesMatter was created in July 2013, around the time of George Zimmerman’s acquittal in the shooting death of Trayvon Martin. But the hashtag sat quietly for a long time: the month before Michael Brown’s shooting in early August 2014, it was only used a total of 48 times a day across Twitter. Freelon, one of the study’s authors, said it was being “kind of used in a generic way,” with mostly affirmative messages that weren’t necessarily even political.

Come August, though, the hashtag was used more than 52,000 times. And that was only the beginning.

“You can actually see the day it goes mainstream — Nov. 25, the day that the decision not to indict Darren Wilson came down,” Freelon told me. In the first 20 hours of that day, #blacklivesmatter was used on Twitter about 10,000 times. In the four hours of that day following the verdict, it was used 92,784 times.

“If you remember, there were a number of other hashtags that were jockeying for supremacy — #handsupdontshoot, #icantbreathe, #justiceforall,” Freelon said. There were also the hashtags made up of the names of individual people killed by police. “What’s interesting is the one that [won out] was the one that framed these stories in explicitly racial terms.”

Another fascinating tidbit: The prominence of the Michael Brown case, relative to some other stories of police violence, is somewhat counterintuitive. The incident that led to Eric Garner’s death was captured on video and took place in New York City, the nation’s largest media market, while Michael Brown’s death was in a tiny suburb in the Midwest. Yet, while #ericgarner was appended to about 4.3 million tweets in the study period, #ferguson showed up in 21.6 million tweets, and #michaelbrown/mikebrown was used in about 9.4 million.

The study goes on to describe how clusters of conservative Twitterers helped bolster the conversation, though their hashtags were a bit different (e.g. #pantsupdontloot).

It also talks about how even though you would expect mostly women to be the driving force of #BlackLives Matter, that’s actually not the case.

“If you look at the top 10 … it’s half activists … some media folks,” one of the study’s authors, Deen Freelon,  told NPR.

“You’ll notice that only one of them is a woman,” he said, referring to Johnetta Elzie, @Nettaaaaaaaa on Twitter, who was profiled in the New York Times and co-edits a prominent newsletter focused on race and policing.

Read more about the study here.