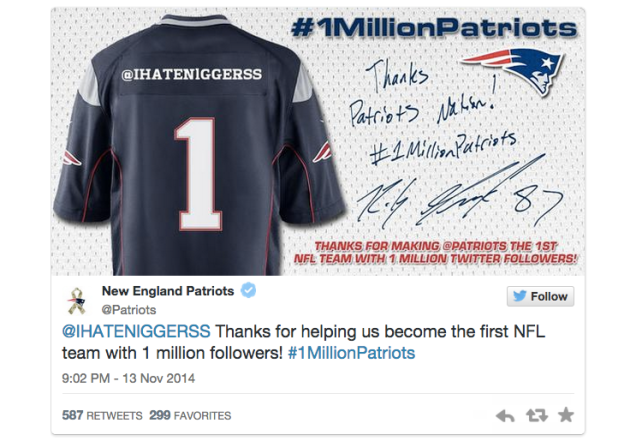 Reaching 1 Million followers on Twitter is an accomplishment worth celebrating, so the New England Patriots‘ social media team decided to start an online campaign asking their fans to retweet their message marking the milestone, and in return, their Twitter username would be put on the back of a “digital custom jersey.”

A good idea in theory, but too bad the Patriots didn’t anticipate someone with a handle that included a racial slur would retweet their message, making their seemingly innocent plan backfire in the worst way. The tweet thanking Twitter user @IHATENIGGERSS for becoming “the first NFL team with 1 million followers” stayed up on the Patriots’ page for about an hour until someone noticed it and deleted it. But as we should all know by now, once something is posted on the Internet, it can never be really deleted.

By the time the racist tweet was removed, it had already gone viral. The team later apologized in a follow-up tweet: “We apologize for the regrettable tweet that went out from our account. Our filtering system failed & we will be more vigilant in the future.”

We apologize for the regrettable tweet that went out from our account. Our filtering system failed & we will be more vigilant in the future.

Apparently, the team’s Twitter account was running an automated app that automatically selected users who retweeted the message, so it wasn’t exactly their fault 100%, but this should definitely serve as a lesson as to why you shouldn’t let robots run your social media feeds.