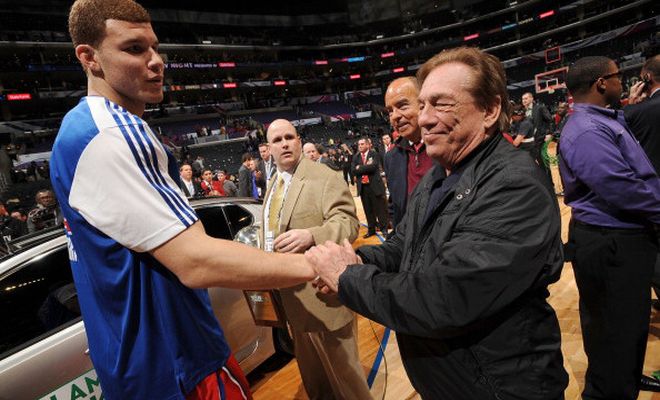 NBA star Blake Griffin covers the October 2014 issue of GQ Magazine, on stands now, and inside, the Los Angeles Clippers player talks about a lot of things going on his life … but the biggest thing that stands out in his interview are the stories he shares about awkward encounters he had with his former boss Donald Sterling.

About Sterling Griffin said, “it was unfortunate. I mean, for me, like I said, the first thing I ever Googled about the man, the first thing that popped up was ‘racist.’ So I was aware. I hate to say this, and it might sound ignorant, but I wasn’t surprised that all this came up.” Being a basketball player in Blake Griffin’s position not only means leading a busy lifestyle, but also awkward encounters with the boss, and Griffin says he’s had way too many of those with his ex boss Sterling, who he described as that “weird uncle” type.

“He would bring people in the locker room while we were just in towels. One year he came in and led a ‘hip hip hooray’ chant and held my arm up in the air. Then he went to another teammate and did the same thing. Guys just started scattering as fast as possible.”

“The second time I met him… He throws a white party in Malibu every single year, so everyone has to wear white or you can’t come. I get there, and this dude is wearing all black. The only person at this party. He throws a white party, he wears all black. And as soon as I get there, he comes to the front, we talk for a second, and he’s like, “Come on, I want to introduce you to everyone.” Grabs my hand and starts walking me through the party while we’re holding hands, and just introduces me to everybody.”

“I was hoping to escape down the stairs, find one of my teammates and blend in with the rest of the crowd. I tried to pull my hand away. Nope. Things were about to get weirder … two blonde models showed up on either side of me. They had clearly been hired for the event. I knew this because they were wearing size XXXX-L Clippers T-shirts tied at the stomach. I looked at Sterling. He had a big dumb grin on his face. I looked at one of the girls, as if to say, ‘Uhhh, you don’t have to do this.’ She looked back: ‘Uhhh, yes I do.’”

Griffin also said he listened to the infamous tape, and Googled Sterling’s name afterward, which is when he learned about all of the racial cases against his old boss.

“As players, we’re not supposed to really care about anything but basketball,” he said. “We’re just supposed to perform. To be honest, I didn’t ever really think about bringing up Sterling’s past. What was I supposed to do? Just picture me at the press conference my rookie year. ‘Uh … hey, guys, before we talk about today’s game, did you happen to see that investigative report on my owner?’”