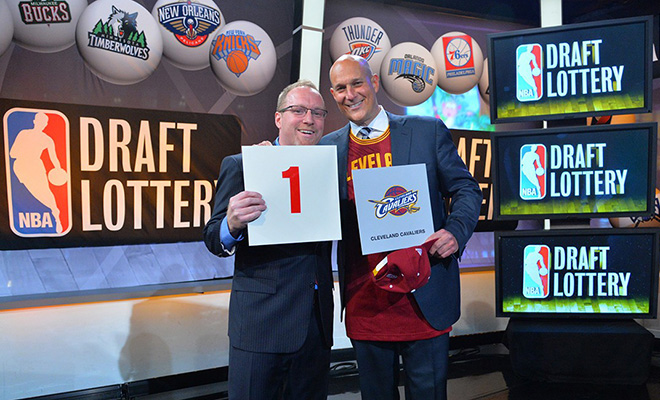 Now that the NFL draft has wrapped, it’s time for the NBA to start recruiting new players for the upcoming 2014-15 basketball season.

For the third time in four years, the Cleveland Cavaliers have won the NBA draft lottery, which means they’ll be able to secure their SECOND STRAIGHT No. 1 draft pick.

They MUST be illuminati, right? Well … at least that’s what the Internet thinks.

How else do you explain the Cavaliers going into the drawing with 1.7 percent chance of landing the first pick and actually winning their third NBA lottery in just four years? (And not only that, but they did score one of the biggest picks of all in 2003 when they got first dibs on signing LeBron James)

ALL SIGNS POINT TO ILLUMINATI.

Yeah, the Cavs really got the No. 1 pick: http://t.co/6ZQw2MVqcy pic.twitter.com/kpWqdXqJaE

Johnny to the Browns? The Cavaliers with two straight years of first overall picks? #ClevelandConspiracy #ILLUMINATI

The Cleveland Cavaliers owner must be in the illuminati.

The Cavs grabbed Kyrie Irving in 2011, Anthony Bennett in 2013 and this year the NBA draft odds is naming former Kansas teammates Joel Embiid and Andrew Wiggins as possible lottery picks.