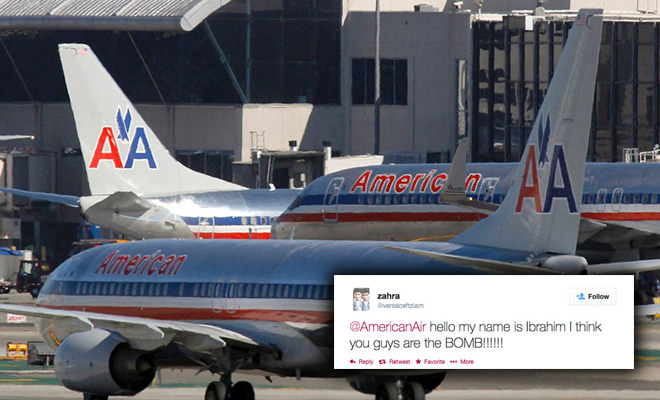 Earlier this week, a 14-year-old Dutch girl known simply as “Sarah” learned the hard way that it’s never a good idea to tweet threats to major airline companies after she was arrested for doing just that.

On Sunday (Apr 13), Twitter user @QueenDemetriax_ pretended she was going to do something to a plane and tweeted at American Airlines what could only be described as one of the most idiotic messages ever posted on the micro-blogging site:

“hello my name’s Ibrahim and I’m from Afghanistan. I’m part of Al Qaida and on June 1st I’m gonna do something really big bye”

The airline company — who had planes hijacked on 9/11, mind you — replied, saying they took the tweet seriously, because of course they did. YOU CAN’T JUST TWEET BOMB THREATS AT AN AIRLINE WHO HAD PLANES HIJACKED ON 9/11 AND NOT THINK THEY’RE GOING TO TAKE THEM SERIOUSLY. “Sarah, we take these threats very seriously,” American Airlines tweeted. “Your IP address and details will be forwarded to security and the FBI.”

Then Sarah freaked the freak out: Proving that they take all threats seriously, regardless of the medium, American Airlines had the girl arrested at her home in Rotterdam, Netherlands Monday. She was released on Tuesday after an initial court hearing.

With that news, you would think that teens on Twitter would learn a valuable lesson: joking or not, don’t send threats to airlines! But because teens are teens, they actually did the opposite, tweeting bomb jokes to not only American Airlines, but also Southwest too, because why not?

“@AmericanAir I have a bomb under the next plane to take off,” tweeted one user.

“You really seem to not care that i’m about to bomb your plane that’s headed to Paris. Btw, my name is Ahmed,” another user tweeted at the airline.

“hello my name is Ibrahim I think you guys are the BOMB!!!!!!” one user joked.

“@SouthwestAir I bake really good pies and my friends call me ?the bomb” am I still allowed to fly?” joked another.

All of the accounts have either been deleted, changed or suspended but the fact that today’s youth are reckless enough to even joke about tweeting bomb threats to commercial airlines should make us all worry about our future.

American Airlines has since deleted the initial tweet they sent in reply to the girl.

“The safety of our passengers and crew is our number one priority. We take security matters very seriously and work with authorities on a case by case basis,” the carrier said in a statement to The Huffington Post. “Regarding (the) tweet, we removed it after it had been addressed in order to be able to focus on our customers.”

As for “Sarah,” she has gained tens of thousands of followers in the wake of the controversy, but has changed her username and made her account private. She, likely, has not learned her lesson and will continue to be a dumb teen until she makes the transition into being a dumb adult.