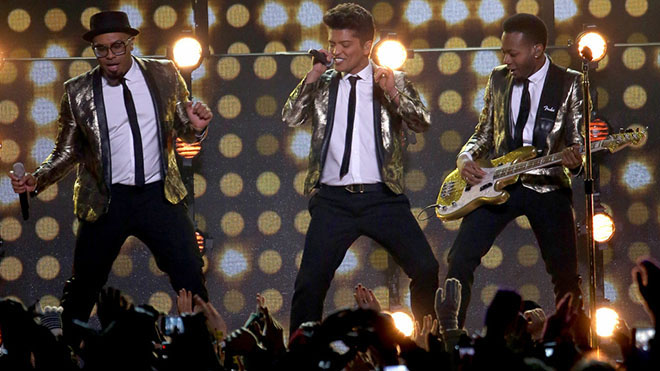 He came. He saw. He conquered. Bruno Mars did his THANG tonight, you guys!

Following in the footsteps of Beyoncé, Madonna, Prince, Justin Timberlake, Michael Jackson and many others before him, Bruno Mars played for the biggest audience of his life when he headlined the Pepsi Super Bowl XLVIII Halftime Show Sunday night. Smack dab in the middle of what will go down in history as the most boring Super Bowl ever, the 28-year-old R&B/Pop sensation — accompanied by his eight-piece band, known as “The Hooligans” — put on an electrifying 13-minute show, complete with lots of dancing, a ton of pyrotechnics and enough energy to go around for everyone.

A children’s choir kicked Bruno’s performance off with a quick medley of his first hit “Billionaire,” before Bruno performed a solo on the drums, which read “Bernadette,” paying tribute to his late mother. Mars then launched into a medley of his hits, including “Locked Out of Heaven,” “Treasure” and “Runaway Baby,” thrilling the crowd of more than 27,000 in the stadium and the hundreds of millions at home watching. Mars gave his best James Brown shuffle too before introducing the Red Hot Chilli Peppers and singing their 1991 hit “Give It Away Now” alongside them.

At the end, Bruno Mars capped off his well-received performance solo with a dazzling fireworks display as he sang his No. 1 single “Just The Way You Are.”

Tickets for the second leg of Bruno’s “Moonshine Jungle World Tour,” which will feature special guests Pharrell and Aloe Blacc go on sale tomorrow. The trek kicks off on May 27th in Fresno, CA.