GOSSIPONTHIS.COM Crime (Almost) Burglar Dies After Cutting Himself on Glass While Breaking Into Home
ShareTweet A would-be burglar — note the “almost” in the headline — died after he cut himself on shards of glass while trying to break into an unoccupied home, police in Virginia reported.

Police say they received a phone call last Wednesday night (Jun 20) about a man who was found dead on the kitchen floor of a vacant home.

The man, 73-year-old Duwayne Masure, had broken into the home … but he didn’t get very far, as he had cut himself after he smashed through the back window of the home, and eventually bled to death.

Karma at its finest. 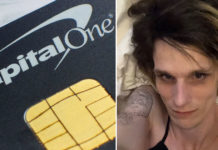