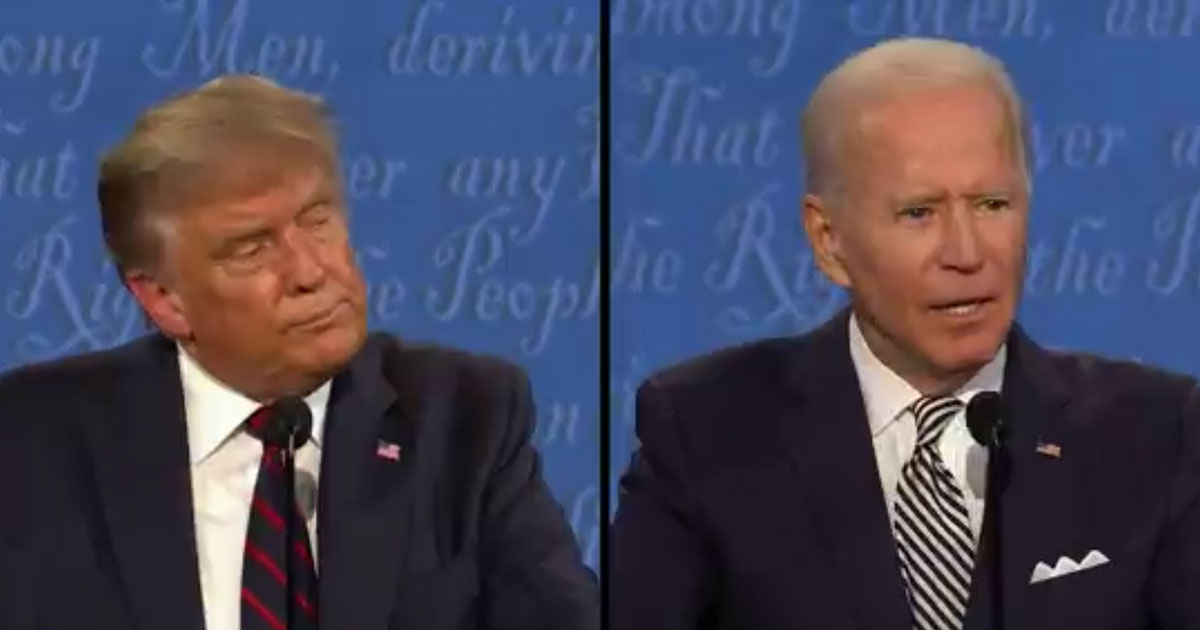 President Donald Trump and Democratic presidential nominee Joe Biden finally squared off face-to-face in the first presidential debate Tuesday (Sep. 29) in Cleveland, Ohio … and Biden could barely get a word in edgewise as Trump talked over him throughout the entire 2-hour exchange.

The debate quickly became unhinged from the jump, with moderator Chris Wallace being unable to keep neither candidate on track, and it all started with one of the first segments of the night about healthcare.

“The fact is everything he’s saying so far is a lie,” Biden told moderator Chris Wallace. “I’m not here to call out his lies. Everyone knows he’s a liar.”

Biden was in the process of answering a question from Wallace on his health care plan.

Trump then interjected, prompting Wallace to ask the president to let Biden finish.

“He doesn’t know how to do that,” Biden said, to which Trump responded, “You’d be surprised.”

Trump continued to hit Biden on his standing with the progressive wing of the Democratic Party, saying Biden “just lost the left.”

“You agreed with Bernie Sanders on a plan,” Trump said.

“Folks, do you have any idea what this clown is doing?” Biden said.

“I’ll tell you what, he is not for any help for people needing health care because he has in fact already cost 10 million people their health care that they had from their employers because of his recession.”

Joe Biden is already done with Trump’s BS: ‘Everything he’s saying so far is simply a lie. Everyone knows he’s a liar … do you have any idea what this clown is doing?’ #Debates2020 pic.twitter.com/EGB8MBO6LG

Moments later, as Trump continued to try and outtalk him, Biden said to  the president: “Will you shut up, man?”

Not long after that, Biden called Trump a “fool” while debating about the efficacy of masks and discussing Trump’s lackadaisical response to the COVID-19 pandemic.

From The Associated Press:

President Donald Trump says he’s had “no negative effect” from massive campaign rallies with thousands of attendees not adhering to social distancing recommendations amid the ongoing coronavirus pandemic.

Trump said during Tuesday night’s debate against Democrat Joe Biden that he thought masks “are OK,” pulling one out from his pocket and saying, “I wear masks when needed.”

But Trump also bragged that he’s drawn “35 to 40,000 people” at his campaign rallies, saying he brings such large crowds to outdoor events “because people want to hear what I have to say.” Trump portrayed Biden’s socially distanced events as insignificant affairs where the Democrat “has three people some place.”

Former Republican presidential hopeful Herman Cain, who attended one of Trump’s rallies in June without wearing a mask or social distancing, tested positive for the coronavirus nine days after the rally and died a month later. Neither Trump nor Biden mentioned him.

Biden has held smaller campaign events, requiring attendees to spread out and at times sit in taped-off circles. Calling Trump “totally irresponsible” on managing COVID-19, Biden said the president is “a fool on this” and said Trump only worried about masks in the interest of protecting his own health, not others.

Joe Biden says Pres. Trump has been "totally irresponsible, the way in which he has handled the social distancing and people wearing masks, basically encouraging them not to. He's a fool on this" #Debates2020 pic.twitter.com/a6RieIne8g

And later during the debate, after the umpteenth interruption, Biden was forced to circle back to the “clown” insult.

“It’s hard to get any word in with this clown,” Biden said. “Excuse me, this person.”

Former Vice President Biden on President Trump: "It's hard to get any word in with this clown. Excuse me, this person." https://t.co/5Bl4Ob3O2t#Debates2020 pic.twitter.com/y2hXjMXX5r

Earlier in the evening, not even 20 minutes into the debate Joe Biden said to the president: “Donald, would you just be quiet for a minute?”