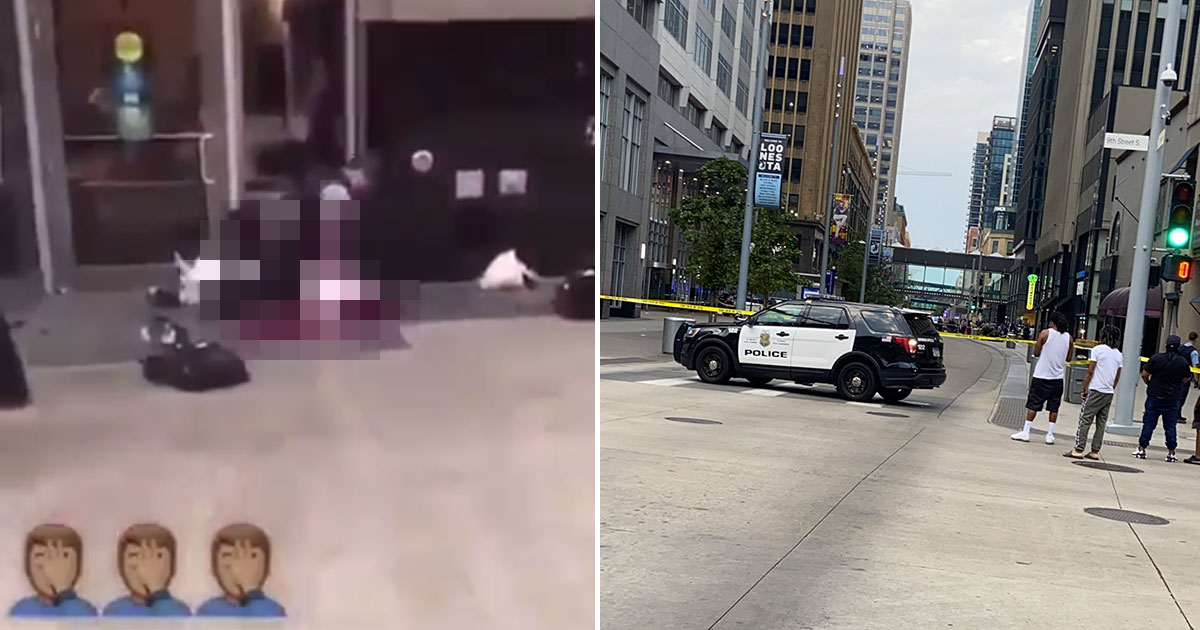 Video footage has emerged on social media showing Minneapolis residents accusing police officers of fatally shooting a Black man in the head, while police contend the man died by suicide.

“Wow! Y’all shot him, bro! Are you f**king serious, bro?!? Y’all bogus as f**k!” a man can be heard shouting in one video as police stress that the man shot himself.

“We just seen you!” the man behind the camera replies. “We seen him drop right there! He ain’t shoot himself, bro! He gone, bro! He dead, bro! Y’all bogus as hell, bro!”

Minneapolis police just shot a young black kid in the head and they claim he committed suicide. Right on downtown. pic.twitter.com/igrhWKyerq

According to the StarTribune, the deceased man was wanted in the killing of another man in a downtown parking garage.

MPD spokesman John Elder said the man was on traveling on foot on Nicollet Mall between 8th and 9th street around 6 p.m. local time when police pulled up and he shot himself in the head.

“There is no question that this was a suicide and we will be releasing the video to answer any question of that,” Elder said, adding that several bystanders were present at the time of the shooting, and the incident was captured by several city cameras. He said authorities are in the process of releasing the footage to the public.

A number of local news reporters said they watched the surveillance footage showing the shooting, and it “appears to show a murder suspect die by suicide as officers were closing in on him.”

Minneapolis police have just shown us video from a city surveillance camera that appears to show a murder suspect die by suicide as officers were closing in on him earlier tonight. This is a freeze frame from the second before it happened… pic.twitter.com/q1rVeDgCm0

News of the man’s shooting death drew a large crowd of people, and they immediately started smashing windows of nearby businesses and police cruisers parked near the scene. Videos also showed looters rushing into stores.

TARGET: Round 2 Looting in Minneapolis

Police say they were called around 2:10 p.m. to respond to a shooting near the parking ramp on 101 N. 9th St., where they found a victim dead on the ground level.

“The investigation reveals that two people were in a disagreement with him, one person pulled out a gun and shot him,” the MPD spokesman said. “We do not believe this was a random attack, but rather people that were familiar with each other, we do not believe there is a threat to the public.”

The suspect reportedly fled the scene and is believed to be the man who police are saying killed himself. His identity hasn’t been released yet.

A woman with the suspect also reportedly left the scene, but she was later found and has been detained for questioning.

The shooting happened as the city of Minneapolis is in a state of unrest following the May 24th killing of George Floyd by MPD officers.

Nearly four-hundred miles away in Kenosha, Wisconsin, 29-year-old Jacob Blake was shot in the back seven times by KPD officer Rusten Sheskey—a seven-year veteran with the department.

Blake survived the shooting, but was left paralyzed from the waist down, according to his father. His shooting has sparked a new round of protests across the country against systemic racism and police brutality.