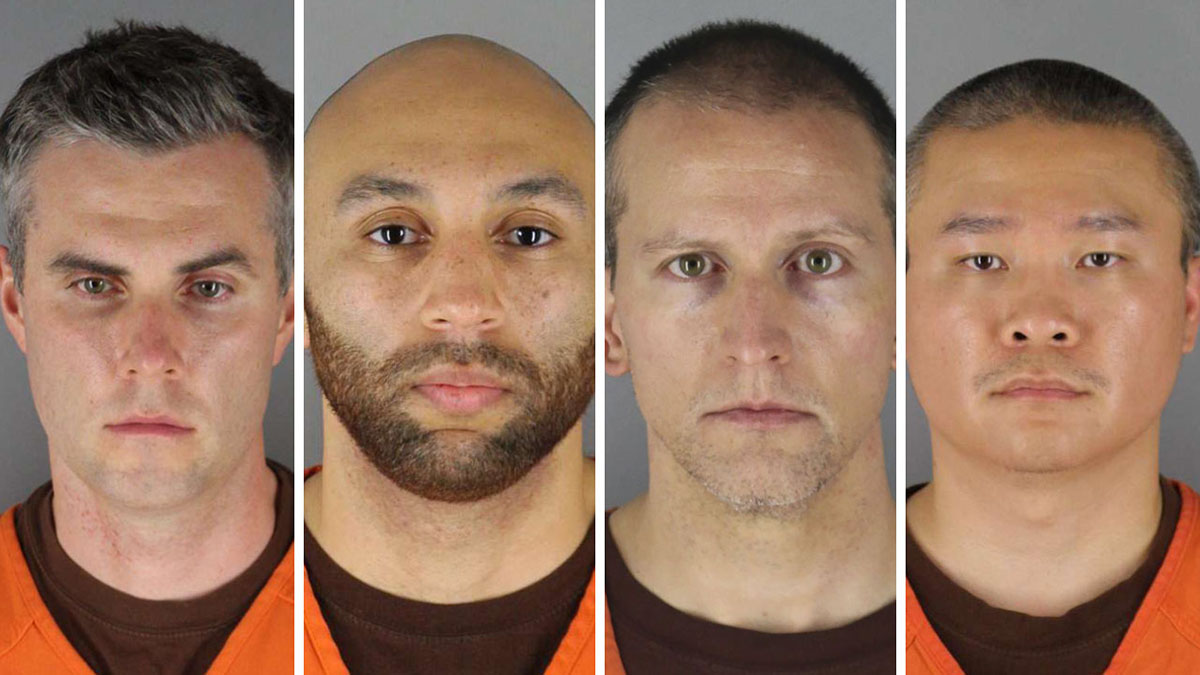 The mugshots of the four former Minneapolis police officers responsible for George Floyd’s death have been released following their arrests, and they all face up to 40 years in prison if convicted as charged.

Thomas Lane, J. Alexander Kueng and Tou Thao were all present when Derek Chauvin pressed his knee into the back of George Floyd’s death in Minneapolis for nearly nine minutes.

Chauvin was already in custody and the other three cops were taken into custody to be booked and processed on Wednesday.

The updated criminal complaint against Derek Chauvin stated that the officer’s actions were a “substantial causal factor” in Floyd’s death.

The charges come after a week of global outrage and civil unrest across America in which millions called for the former MPD officers to be brought to justice.

Ellison said at a press conference Wednesday afternoon: “I strongly believe these developments are in the interest of justice for Mr. Floyd, his family, this community and this state.”

Ellison also thanked the public for giving him time to bring the charges.

“I asked for time for to review all the evidence. The investigation is ongoing at this time. I know it’s asking a lot of people to give us time and yet we did get that time,” he said.

“Together, a very strong experienced team, we reviewed the evidence and we have something to announce today. Thank you for the patience of the people they’ve shown me in pursuit of justice.”

Ellison added that the case remained under investigation and said the road ahead will not be easy while asking anyone with evidence to come forward with it.

“We are investigating as quickly as we can and as thoroughly as we can. Every single link in the prosecutorial chain must be strong. Trying this case will not be an easy thing.

“I say this not because we doubt our resources or our ability but history does show there are clear challenges here and we are going to be working very hard to support that endeavor.

“To the Floyd family, I say: ‘George Floyd mattered. His life had value and we will seek justice for him and for you and we will find it. The very fact that we have filed these charges means that we believe in it.'”

Ellison warned that the investigation would take “months” because he wants to build a “solid case” and not rush a trial.

“It will take a while and I can’t set a deadline on that,” he said.

Ellison added the charges brought against the officers shouldn’t bring an end to the global outrage over injustice sparked by Floyd’s killing.

“A protest can shake a tree and make the fruit fall down but after that fruit is in reach, collecting it and making the jam must follow,” he said.

“The demonstrations and protests are dramatic and necessary but building just institutions is more of a slow grind. We have to begin that work now.”

Floyd’s family called the charges a “bittersweet moment.” While they are happy all four cops have been charged, they wanted Chauvin to be hit with first-degree murder charges, which carries a maximum sentence of life in prison.

All four cops were immediately fired from the Minnesota Police Department after the video showing Floyd’s death went viral Tuesday (May 28), but it took until the next day for Chauvin to be charged, and the other officers were charged a week later.

The case was taken from the hands of Hennepin County Attorney Mike Freeman and handed over to Minnesota AG Keith Ellison earlier this week following outrage over how the case was being handled.

44-year-old Chauvin was one of six officers connected to the death of Wayne Reyes in 2006. Reyes, 42, was killed by police after allegedly pulling a shotgun on the six cops.

Two years later, Chauvin was investigated for his role in the 2008 shooting of Ira Latrell Toles during a domestic assault call. Toles was wounded after police said he went for an officer’s gun and Chauvin shot him in the stomach.

In 2011, 23-year-old Leroy Martinez was injured in a shooting during a chase given by officers, including Chauvin.

Tou Thao was part of a $25,000 out-of-court settlement after he was sued for using excessive force in 2017 during an arrest in which he was accused of punching and kicking a handcuffed suspect “until his teeth broke.”

The other two officers, Thomas Lane and J. Alexander Kueng, were reportedly rookie cops who were still in their probationary periods.