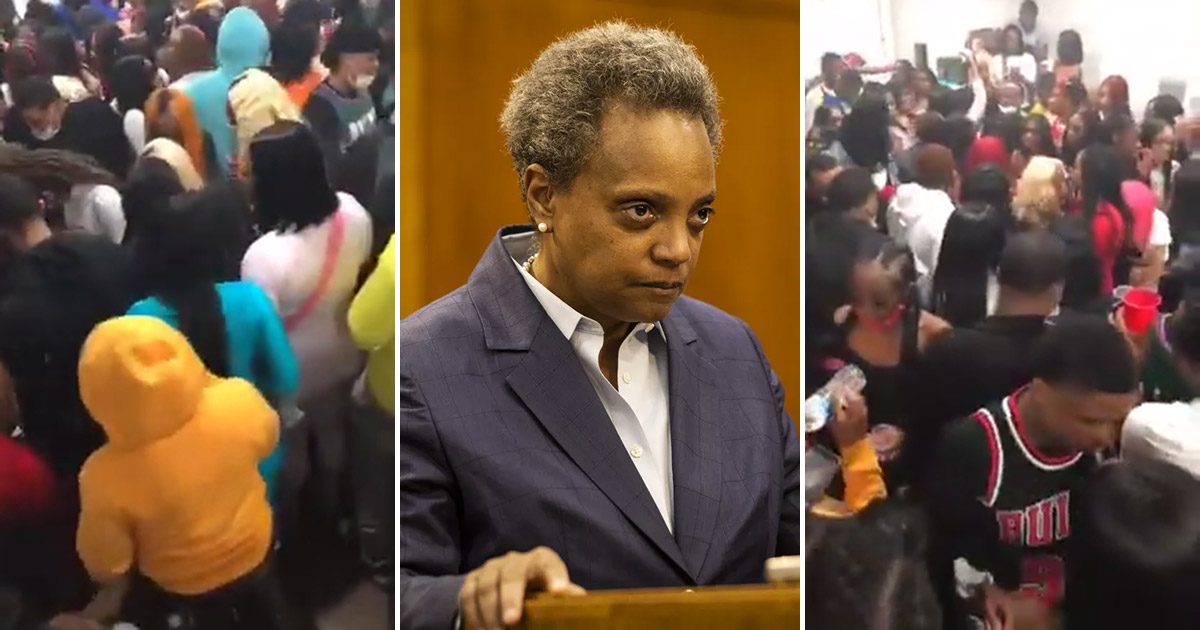 Over the weekend, video footage surfaced showing partygoers packed into a home in Chicago’s westside area partying it up amid the COVID-19 pandemic that has infected over 3 million people worldwide and killed close to 210,000 so far.

“You can’t even move in this bitch!” Tink Purcell, the Chicago resident who uploaded the viral video footage, could be heard saying off-camera.

“I had my mask and sanitizer I was good,” Purcell later posted on Facebook.

Mary Lightfoot slammed the party on Twitter the next day, calling the gathering “reckless and utterly unacceptable.”

“I have seen the video which shows what appears to be a house party taking place inside a Chicago residence,” she wrote.

“What was depicted on the video was reckless and utterly unacceptable. I know this is a very difficult time for Chicagoans, but there is a reason we are asking you to stay home and socially distance: it saves lives.

“While most Chicagoans are doing their part to prevent the spread of COVID-19, reckless actions like these threaten our public health and risk erasing the progress we have made. We will hold those responsible accountable. I am asking everyone to be in this together,” Lightfoot continued.

She added: “Residents can anonymously submit a tip about house parties at cpdtip.com and CPD will shut them down immediately. The fewer people who comply with the ‘Stay At Home’ Order, the sicker our residents will get and the harder it will be for us to recover.”

I know this is a very difficult time for Chicagoans, but there is a reason we are asking you to stay home and socially distance: it saves lives.

Residents can anonymously submit a tip about house parties at https://t.co/Tt6O9g49ZD and CPD will shut them down immediately. The fewer people who comply with the “Stay At Home” Order, the sicker our residents will get and the harder it will be for us to recover.

Illinois Gov. J.B. Pritzker said Sunday that those who attended the party not only violated the trust of his stay-at-home order, but also “the trust of their friends and family,” WTTW reported.

Chicago police said they were also aware of the footage circulating on social media.

“While we cannot authenticate the nature or location of the gathering, we want to remind everyone of the social distancing requirements in place,” police spokesman Luis Agostini wrote on Twitter.

“CPD will disperse crowds in violation of social distancing requirements, and if necessary, issue citations or as a last resort, enforce via arrest,” he added.

Gov. Pritzker said he hadn’t seen the clip, but was aware of its existence.

“You’re literally putting everyone around you in danger,” he said. “You are. They are putting you in danger. And, very importantly, all of those people are putting their families and their friends who are not there with them in danger.”

Though police have the authority to enforce Gov. Pritzker’s stay-at-home order, the governor said he hopes to be able to rely mostly on self-enforcement.

“If they refuse and if they repeatedly refuse, there is the ability by the police officers to charge them with reckless conduct and take them into custody,” he said.

“Though again we have discouraged police from doing that because we believe that people will in general follow the rules.”