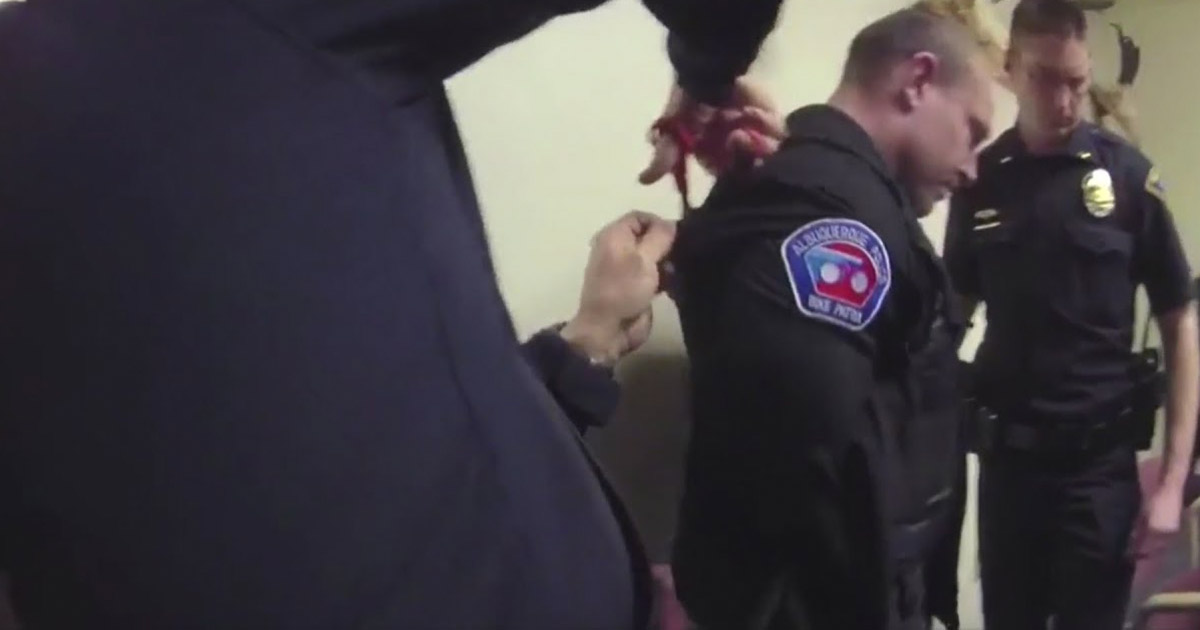 Back in February, a New Mexico cop resigned after being arrested for beating his girlfriend, and a video taken at the time has now surfaced that shows the arresting officers cutting his police uniform off while he was handcuffed.

31-year-old Jeffrey Wharton was greeted by a group of armed Rio Rancho Police officers when he arrived at the station in full uniform, but rather than going about his workday, he was arrested with a felony warrant.

The charges stemmed from a severe beating the former police office inflicted on his girlfriend that was partially captured on the couple’s ring camera, according to reports.

In the video, Wharton is seen dragging his screaming girlfriend back into their home after she attempted to flee.

The woman suffered severe injuries and was rushed to Rust Medical Center before being transported to the University of New Mexico hospital. There, she was treated for gashes on her head and face and bleeding in her brain, court documents say.

Wharton was arrested on multiple charges, including first degree kidnapping, aggravated battery against a household member, and tampering with evidence.

After the officers placed Wharton in cuffs, they proceeded to use scissors to physically remove his uniform rather than letting him take it off beforehand.

When given the opportunity to tell his side of the story, he declined. When asked if he would like to say anything, he declined, simply stating, “Not after hearing that, no.”

The 31-year-old man has been in jail since being arrested as he awaits trial, but his lawyer is attempting to get him out on bail due to concerns over COVID-19.

Prosecutors are hoping to prevent that, saying that releasing him wouldn’t protect the safety of either the community at large or the victim.

As of now, a judge is set to hear that motion next month, but courts across the country are shutting down due to the continued, worldwide pandemic.