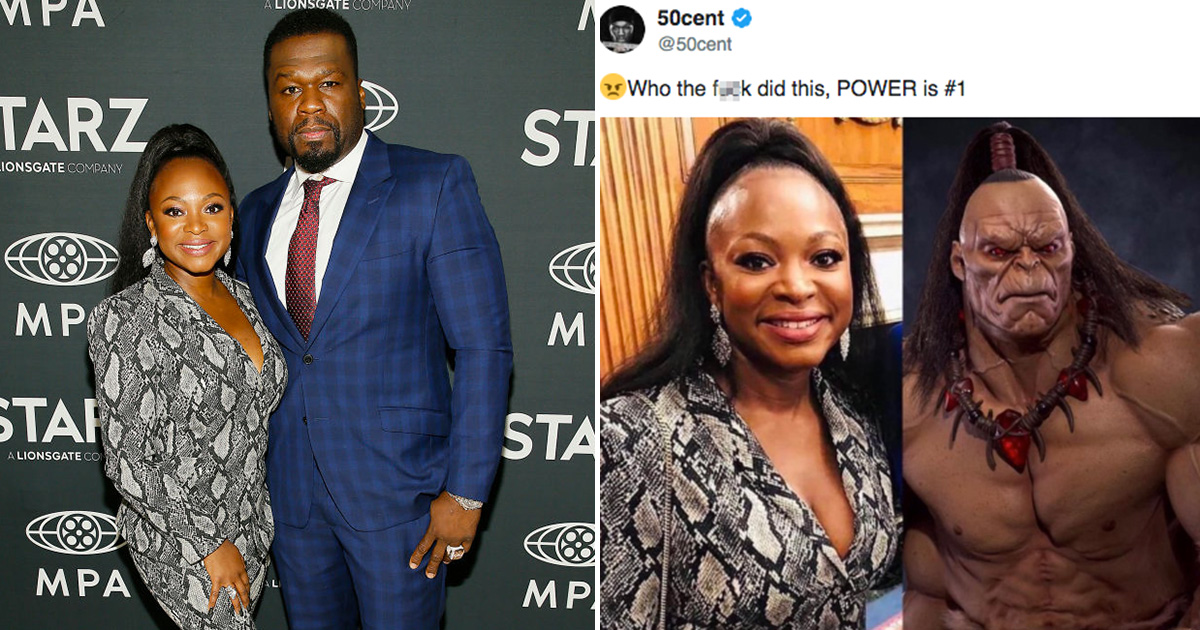 Despite a previous apology, 50 Cent is not done trolling Naturi Naughton on social media.

A little over a week ago, 50 re-posted a meme on Instagram making fun of how prominent the actress’ forehead looked in one particular photo.

The meme pointed out that her hairline had been pushed back as a result of Ghost (Omari Hardwick) mushing her forehead in a scene from a recent episode of Power.

When Naturi saw 50’s post, she wrote on her IG stories: “Umm … mean much @50cent … Don’t I make you look good every Sunday night? But cool.”

Fifty later apologized, writing in a subsequent IG post: “Yes you do a great job on the show @naturi4real. I’m sorry if I hurt your feelings.”

But now it looks like he’s circling back to sharing “mean” memes about his co-worker.

This time, Fiddy took to Twitter (since his Instagram has been deleted) and posted a side-by-side photo of Naughton and Mortal Kombat character Goro wearing a similar hairstyle. “Who the f**k did this,” Fif asked in his caption.

?Who the fuck did this, POWER is #1 pic.twitter.com/XcGFts5yZn

The rapper’s fans weren’t pleased with the post, and slammed him in his mentions.

“50 cent doing that to Naturi is so lame, he should be protecting her as his staff esp when she’s said she’s not happy with what he posted before,” one critic wrote in response to the tweet.

“It looks like someone wasn’t getting enough attention and had to go after Naturi again, obsessed much?” another added.

Another wrote: “Who needs enemies with a boss like this”

50 cent doing that to Naturi is so lame, he should be protecting her as his staff esp when she’s said she’s not happy with what he posted before ???

Aww, it looks like someone wasn’t getting enough attention and had to go after Naturi again, obsessed much?

@50cent why do you keep dissing a black woman's hair? naturi just had a kid a few years ago and could have post natal shedding still, or maybe that's just how her hair is. It's never a good look to make fun of a brown skinned woman who's battled so+ @naturinaughton

50 Cent is a perfect example of don’t apologise if you’re gonna do it again. He literally just apologised to Naturi (dk how to spell her name?) a week ago and now he’s making jokes again?

Naturi recently spoke about how she felt about 50’s meme in an interview with Page Six.

“He knew what he did was shady and apologized for it. He realized it wasn’t the nicest thing to do. I accepted his apology, I’ve moved on,” she said.

“He believes in the work that I do on ‘Power,’ so it was just a matter of making sure that that comes across. I think he gets it, we’re cool. I’ll see him at work within the next couple of days. I don’t hold grudges, it’s water under the bridge.”