While taking their horses to the “Old Town Road,” Lil Nas X and Billy Ray Cyrus made a pit stop at the 2019 BET Awards, where they performed their Billboard No. 1 single.

Dressed in a yellow and black fringe leather jacket and matching pants, Nas—along with Billy—arrived on horseback before turning the stage into a live hoedown, with Nas busting out some serious cowboy moves while Billy Ray led a team of line dancers.

The performance comes on the heels of the release of Lil Nas X’s debut EP 7, which just dropped Friday (Jun. 21) and amid the growing success of “Old Town Road,” which remains at the top of the Billboard Hot 100 chart for the 11th week in a row. 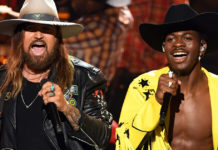