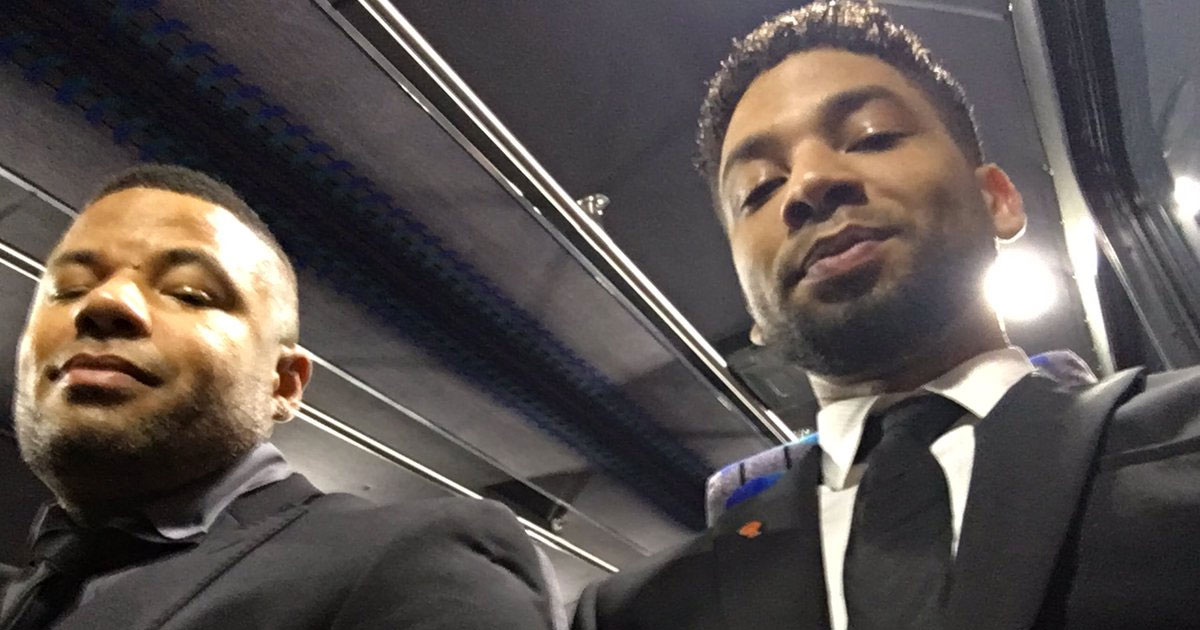 The Smollett family is a talented bunch of singers, writers and actors, but it appears that one of the Smolletts may have missed his calling as a lawyer, because the defense JoJo Smollett has mounted in the form of a guest article on BET.com on behalf of his younger brother, Jussie, is the most compelling clapback that anyone in Jussie’s camp has made to date.

Jojo, who was an actor and producer himself in the ’90s but now runs a nonprofit that helps developmentally disabled people rejoin the workforce, is the oldest of the Smollett siblings.

It’s not clear what spurred the release of the guest column on BET.com, but the article attempts to dismantle the Chicago Police Department’s case against Jussie and also chastises the media for taking the CPD at their word.

Here are some of the most salient, but conflicting, points from the article:

On February 14, the day that the Osundairo brothers were brought in for questioning as suspects, Fox News reported that the Chicago Police Communications Director, in response to leaked sources within the department, had begun spreading the word that Jussie had supposedly staged the attack, stated that the police chief “has contacted @ABC7Chicago to state on the record that we have no evidence to support their reporting and their supposed CPD sources are uninformed and inaccurate.”

If the CPD had no evidence to support the idea of a hoax, prior to interviewing the Osundairos, then they base their whole case against Jussie on that interview. The police chief later admitted that the men made no mention of a hoax until the final hour that they could legally be held. By this time, Jussie had already refused to sign a complaint against the Osundairos, convinced that these men, one who he had considered a friend and the other an acquaintance, could not be his attackers. Most importantly, detectives refused to show Jussie video, photos, or any evidence to prove they were the attackers.

The fact that these two brothers, who in the final hour confessed to attacking my brother yet say it was Jussie who told them to, is all the evidence that the police and the general public needed to be convinced, should be frightening to everyone.

With not one inkling of solid evidence, many believed the false witness testimony from two suspects who turned into witnesses, even though they lacked standard credibility.

It was under-reported that one of the “witnesses” had previously been arrested for attempted murder ending with a plea deal for aggravated battery, or that the brothers repeatedly expressed homophobia on their social media in the past. Additionally, it was never reported that they changed their story while under police interrogation.

In this section of his piece, Jojo claims that the Osundairo brothers only threw out the claim that they were in on the hoax with Jussie at the end of their police interrogation.

He also claims that the police failed to show Jussie video, photo or evidence that the brothers were his attackers, which prompted Jussie to refuse to press charges against them.

But then Jojo undermines the credibility of the brothers by claiming the brothers had a history of “homophobia” and one of them had an attempted murder charge against them, which makes it seem like the family does believe they did it.

It’s confusing. Because either the brothers did attack Jussie and Jussie refused to prosecute them for it, which raises the question of why he would allow them to get away with it. OR Jussie doesn’t think the brothers did it and instead, the CPD is framing them for something they didn’t do. And if that’s the case, why is he not aggressively in pursuit of his real attackers?

Also, the idea that the Osundairo brothers would be homophobic and still engage Jussie as “friends” seems like a bit of a stretch. Jussie, by his brother’s own admission, plays a visible gay character on Empire and is a vocal LGBT activist and out gay person in his personal life.

If homophobia is their M.O., wouldn’t they have avoided Jussie from the outset? Why would the Osundairo brothers build a supposedly close relationship with Jussie only to assault him randomly for being gay, which you knew he was all along?

One important note, the Superintendent of the Chicago Police Department announced publicly that Jussie’s motive in staging an attack was so he could make more money from Empire.

Fox immediately said that wasn’t true but the police chief never withdrew his accusation. The chief also stated as fact that Jussie had sent himself the threatening letter that arrived at the Empire production offices weeks before the attack. The FBI then refuted this claim. Again, the chief did not correct his accusations. Letting it float for the public to either believe or not.

After several of these examples, anyone would have concluded what we knew — that the entire police case rested on two witnesses that lacked credibility and there was no physical evidence tying Jussie to this crime.

Now Jojo is accurate in that people other than Jussie’s camp undermined the narrative that the CPD was pushing. Namely, the FBI refuted the claims that it had been determined that Jussie sent his own threatening letters. But it also didn’t exactly exonerate Jussie.

And while the CPD’s credibility certainly was damaged by the countless leaks to the press and the overzealous TV interviews, it’s also true that the basic facts of Jussie’s story still don’t make any sense.

Why would two MAGA supporters (in Chicago of all places), randomly search Jussie out to attack him at 2 a.m. in subarctic temperatures on a January night? And even if that WERE true, why is Jussie not adamant about finding his attackers and holding them accountable?

What concerned me the most is, as the CPD continued their campaign against Jussie, I started to notice an online “bandwagon” approaching ignoring whether there were any real facts to suggest his guilt. In an effort to fit in with the momentum on social media, many appeared to roast him, demean him, and laugh at a traumatic and painful ordeal.

Jussie is as strong as iron, but following an attack like this, there is a normal and natural amount of post trauma that mostly anyone should expect to suffer. I have literally seen him violently awakening from night terrors, following the assault. Some of my siblings, as well as Jussie’s partner and closest friends have seen similar things.

I mean, no offense, but Jussie didn’t sustain any lasting injuries from the alleged assault. Based on the mugshot, homeboy has a bruised cheek and a minor cut.

Also, Jussie didn’t help the situation when he got onstage and made outlandish claims like “I’m the gay Tupac,” so you can’t put this all on everyone else, Jojo.

Jojo Claims Jussie Had No Choice But to Forfeit the $10,000 Bond

Jussie has been an entertainer since the age of five, and loves his craft. He is a consummate singer, dancer, actor, and the funniest person I have ever known. Today, unfortunately, he finds his livelihood in jeopardy.

Jussie was concerned that forfeiting the $10,000 bail could look like an admission of guilt. In fact, not paying, and proceeding with a potentially multi-year process that would bankrupt him and his career was not a realistic option. Even now he carries immense financial burdens for his legal defense and security needs.

This makes zero sense. Jussie was absolutely right to believe that the forfeiture of the bond money would seem like an admission of guilt, because it is.

No one, especially someone who claims the CPD has NO PHYSICAL EVIDENCE AGAINST HIM, would forfeit their bond and walk away from the case completely.

If the CPD’s entire case is baseless and you stand on that, why would you not proceed with the defense of clearing your name, since you’ll emerge victorious and likely be able to recoup those litigation causes anyway?

And by the way, the decision to forfeit the bond in an attempt to avoid a costly, prolonged legal battle is a moot point since the CPD is pursuing Jussie in court on civil charges. So what was the point?

All in all, while Jojo’s letter made some valid points, it didn’t do enough to cover the Grand Canyon-sized holes in Jussie’s story, but for a former-actor, it was a decent attempt at playing lawyer for his brother.

And of course, the choice to use BET.com as a platform was smart as they were more likely to be more friendly to Jojo’s biased POV and not scrutinize the content as much as, say, The New York Times or The Wall Street Journal.

For example, Jojo misspelled the Nigerian-American brothers’ names as “Osundario” instead of “Osundairo” and BET failed to correct it, indicating this was likely a piece that went to press with a minimal amount of editing or fact-checking.

But what do y’all think? Did Jojo’s little letter make you shift to Team Jussie or are you still lookin’ at him sideways?